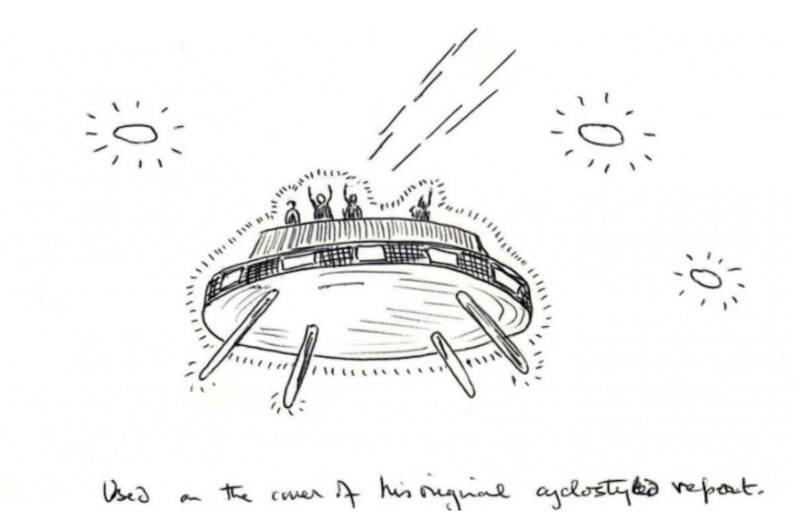 The following incident occurred at the Australia Anglican mission in Papua, New Guinea in April 1959. One of the primary witnesses was Father William Booth Gill.

What looked like ‘men’ came out of the object, onto what seemed to be a deck on top of it. There were four men in all.

Gill saw a bright white light in the north western sky. It appeared to be approaching the mission and hovering about 100 meters up. Eventually 38 people, including Gill, teachers Steven Gill Moi and Ananias Rarata, and Mrs. Nessle Moi, gathered to watch the main UFO, which looked like a large, disc-shaped object. It was apparently solid and circular with a wide base and narrower upper deck. The object appeared to have four ‘legs’ underneath it. There also appeared to be about four ‘panels’ or ‘portholes’ on the side of the object, which seemed to glow a little brighter than the rest. At a number of intervals, the object produced a shaft of blue light which shone upwards into the sky at an angle of about 45 degrees. Gill reports,

What looked like ‘men’ came out of the object, onto what seemed to be a deck on top of it. There were four men in all, occasionally two, then one, then three, then four. The shaft of blue light and the ‘men’ disappeared. The object then moved through some clouds. There were other UFO sightings during the night. Gill described the weather as variable sky scattered clouds to clear at first, becoming overcast after. He estimated the height of the clouds at about 600 meters. The first sighting over the sea, according to Rev. Gill, seemed to be about 150 meters above the water all times. The main UFO was clearly visible and seemed mostly stationary during the twenty-five minutes of observation.

Astonishingly, the aerial visitor put in a repeat performance the following night, 27 June. As reported by Gill:

Although the sun had set it was still quite light for the following fifteen minutes. We watched figures appear on top four of them, no doubt that they are human. Possibly the same object that I took to be the “Mother” ship last night. Two smaller UFOs were seen at the same time, stationary. One above the hills west, another over-head. On the large one two of the figures seemed to be doing something near the center of the deck, were occasionally bending over and raising their arms as though adjusting or “setting up” something (not visible). One figure seemed to be standing looking down at us (a group of about a dozen). I stretched my arm above my head and waved. To our surprise the figure did the same. Ananias waved both arms over his head then the two outside figures did the same. Ananias and I began waving our arms and all four now seemed to wave back. There seemed to be no doubt that our movements were answered. All mission boys made audible gasps (of either joy or surprise, perhaps both).

You must also keep in mind that there was nothing eerie or other worldly about any of this. It was all so ordinary, as ordinary as a Ford car. It looked a perfectly normal sort of object, an earth made object. I realized, of course, that some people might think of this as a flying saucer, but I took it to be some kind of hovercraft the Americans or even the Australians had built.

The figures inside looked perfectly human. In fact, I thought they were human, that if we got them to land, we would find the pilots to be ordinary earth men in military uniforms and we would have dinner with them.

In 1973, researcher Allen Hynek visited Australia and Papua New Guinea and found six of the witnesses to the Boianai events. They all supported Gill’s version of what had happened.