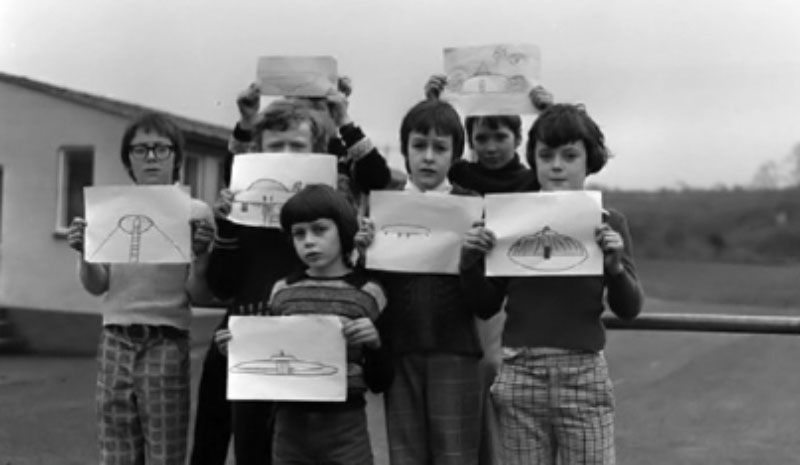 The Broad Haven School UFO Incident of 1977 in Wales is one of many that would bring the eyes of UFO researchers, and indeed the eyes of the Ministry of Defense, bearing down on the area.

Fourteen children would make reports of seeing a UFO land in broad daylight in a field across from their school. Six of them even claimed to have seen a humanoid figure in a “silverish suit” emerge from the craft. Also noted were “odd long ears!”

They described a silver, cigar-shaped object that landed shortly after lunch time, just before the children began their afternoon classes. Some witnesses would speak of an orange-green light that sat on a dome on top of the craft.

Two hours later, the object was still there. It eventually rose from the ground and hovered overhead. It was of a similar size to a double-decker bus according to reports. After hovering for several minutes, it disappeared behind the trees and out of sight.

A teacher at the school (who wished to remain anonymous) reported she also had seen something strange that day. A “shiny oval-shaped object with a slight dome” in the field where the children said they saw it. She also heard a distinct humming sound as the object rose above the trees.

None of the teachers believed the children and so the headmaster separated them and got them to draw what they saw. There were slight variations, but what they drew was basically the same.

By the following day, initial inspections of the area showed rain had washed away any markings from the ground. Interestingly, however, there was substantial damage to a telegraph pole. It was bent at an angle and stood where the children claimed they saw the object hovering. 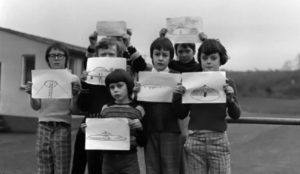 One child can lie, but can a whole class? Over 40 years at least one of them might have come forward to say they made it up—but they haven’t.