Experiencers consistently report encounters with a wide variety of non-human intelligences (NHIs). These five are some of the most commonly reported.

Lisa Galarneau. (2016). Five Common Types of ETs and What They Look Like by David Chase, FREE Volunteer. Medium.

A bewildering variety of different types of ETs have been described by witnesses over the years, but they tend to fall into a few general categories based on their appearance.

First, we have the type that, since the late eighties, has been referred to as “the Grays.” The descriptions of these beings, and the way they are depicted in drawings, vary considerably, but they tend to have some common features and a recognizable “look.” In most cases, they are relatively small, thinly built humanoids with a proportionately large head and cranium. Height is often around three to five feet.

The eyes are large, typically slanted and either almond or tear-drop shaped, sometimes described as wrapping around the sides of the head.

The eyes are large, typically slanted and either almond or tear-drop shaped, sometimes described as wrapping around the sides of the head. The eyes are most often described as solid black in color, without discernible iris or pupil. In some cases, however, a lighter area is noted near the outer corner of the eye, or there is a barely visible pupil. The nose is usually just a subtle bump with a couple of small holes for nostrils. The mouth is most often described as a simple slit. Ears, when noticed, are usually small holes or slits, sometimes with a subtle shell of cartilage.

Grays tend to have thin bodies with little or no muscle definition. In some cases, the body is described as spindly, while in others the build is more like that of a small child. The skin tends to be smooth and featureless, without any visible hair or scales. Some Grays have wrinkled skin, or what resemble pock marks or indentations on the face. Skin color varies from shades of gray to ash white. Other colors, such as chalky beige, tan or blue-gray have also been described. The hands typically have four slender fingers, often including one that serves as a thumb, but many variations have been described, and the total number of fingers can range from three to six.

Those who have seen Grays of different subtypes sometimes distinguish between Small Grays (or Short Grays) and Tall Grays. Tall Grays may have thinner frames and comparatively elongated features. They usually serve more specialized functions, such as doctors, leaders and teachers. A Tall Gray “female” sometimes is in charge of the nursery or incubatorium, and tends to the needs of gestating fetuses, hybrid babies, or children. The Small Grays usually serve as “gofers” or workers. They have a limited emotional range and generally work together cooperatively without rank. They take their instructions from Tall Grays and other ET types.

Grays may have gender that is sensed by their “energy” or personality, but males and females tend to look alike. They may wear tight-fitting “diving suits,” jumpsuits or uniforms of a sort, though Tall Grays sometimes wear robes or capes. In many cases Grays simply appear to be unclothed.

Next are the human-looking beings, which, based on their overall physical appearance, could pass for human. The most recognizable and often discussed human-looking ETs are those that have been called the Nordics. They typically have Northern European (Scandinavian) features. In some cases, the skin color is tan and in others it is very light (fair). The skin appears hairless and free from any moles or blemishes. The facial features are refined. The eyes are often blue, but other colors have been described. The eyes are sometimes described as “mesmerizing.” The gaze of the Nordics is the most alien thing about their appearance. The hair is blond. Nordics have a handsome physique. They are tall people, often between six and eight feet in height. Nordics sometimes wear close fitting uniforms or long robes or gowns.

The gaze of the Nordics is the most alien thing about their appearance. The hair is blond.

Non-Nordic variants of human-looking ETs have been reported as well, including beings that have Native American, African or Asian features, beings with weathered looking skin, and beings with a widow’s peak hairline or skullcap and a Draculean look. Some witnesses have described beings that look human except for their eyes, which have vertical slit pupils.

The next group is the reptilians. These ETs look like reptilian humanoids. In other words, they have a humanoid body plan, but reptilian features. Typically, reptilians have scales, claws or talons, and a lizard-like snout or muzzle. In most cases they have eyes with a vertical slit pupil and a yellow or red iris. In contrast to the Grays, reptilians tend to have very well-defined musculature. They also have pronounced tendons and heavy bone structure. Some reptilians have tails, and some do not. Most reptilians are tall, in the range of six to eight feet, but “dwarf reptilians” only a few feet tall have also been reported. Some reptilians have a hard breastplate that covers the chest, others have a series of wide ventral scales running down the front of the torso, and still others have relatively small scales on the chest. Reptilians typically have four or five fingers, arranged in the same way as on a human hand, with one finger acting as a thumb. Often there is webbing between the fingers. Reptilians are usually green, brown or greenish gray in color, but other colors, such as white, have also been reported.

Most reported reptilians are male. In a few cases, females have been encountered, but due to a lack of mammary glands, they tend to physically resemble the males, distinguished only by subtle differences in such things as bone structure and hip to waist ratio. As with Grays, however, a difference in gender can often be “sensed” even if external physical differences between males and females are not obvious. Some reptilians, and other ET species, may be androgynous. 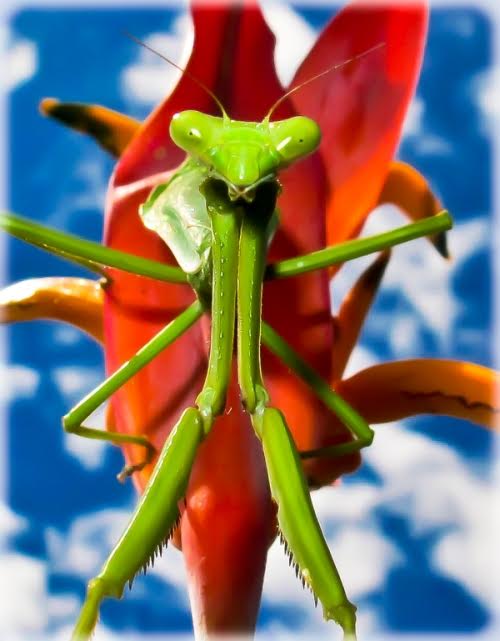 The next group is the insectoids, which are often described as resembling praying mantises. The term “insectoid” simply means having an insect-like appearance. These are the most alien-looking of the common ET types, because, to put it bluntly, they look like bugs. To see a creature that looks like an invertebrate moving about with intelligence takes “alien” to another level. Insectoids often have enormous eyes and heads shaped like the head of a mantis or an ant. The mouth can be a simple horizontal slit, or something more complex, like the mouthparts of an insect. Insectoids have thin limbs, usually with prominent joints. Their movements tend to be stiff or “jerky.”

To see a creature that looks like an invertebrate moving about with intelligence takes “alien” to another level.

The hands typically have three or four long, slender fingers, though different types of hands have been reported. Insectoids often have a very bony appearance, sometimes including protruding vertebrae or bumps on the back. The body surface often looks hard, like a chitinous exoskeleton. It is possible that insectoid ETs have some combination of both an internal and external skeleton. They are not simply oversized insects, but the details of their physiology are unclear. Praying Mantis-type ETs sometimes wear long capes or hooded “monk’s robes.”

Hybrids, our fifth ET type, are defined as having a mix of features from two or more different types of beings. Hybrids are intermediate forms. Usually when people refer to hybrids in the context of UFO experiences, they are talking about something that resembles a cross between a Gray and a human being, but even within that group there are innumerable variations. There are also reports of beings that look like “hybrids” between other types (i.e., Tall Gray and insectoid, Small Gray and dwarf reptilian, or reptilian and human).

Something that resembles a cross between a Gray and a human being.

The term “hybrid” has a specific biological definition, but in this context,  we are using the term more loosely. The names used in this essay for the different types of ETs are based on appearance or physical description, rather than biology or genetic ancestry. This is for the obvious reason that we lack any physical specimens of ET for direct study.

One problem in defining these five types is that they have fuzzy edges where they overlap. For instance, a being that resembles a Gray but with somewhat humanlike proportions or features, might be referred to as a Gray by one experiencer and as a hybrid by another. So these descriptive categories are not absolute…

Note from the editors: Additional categories could be added to this list, including: Light Beings, Hairy Beings, Stocky Dwarfs and Robots. There are still other types that defy classification, and are reported only rarely, or may even be unique to specific cases.