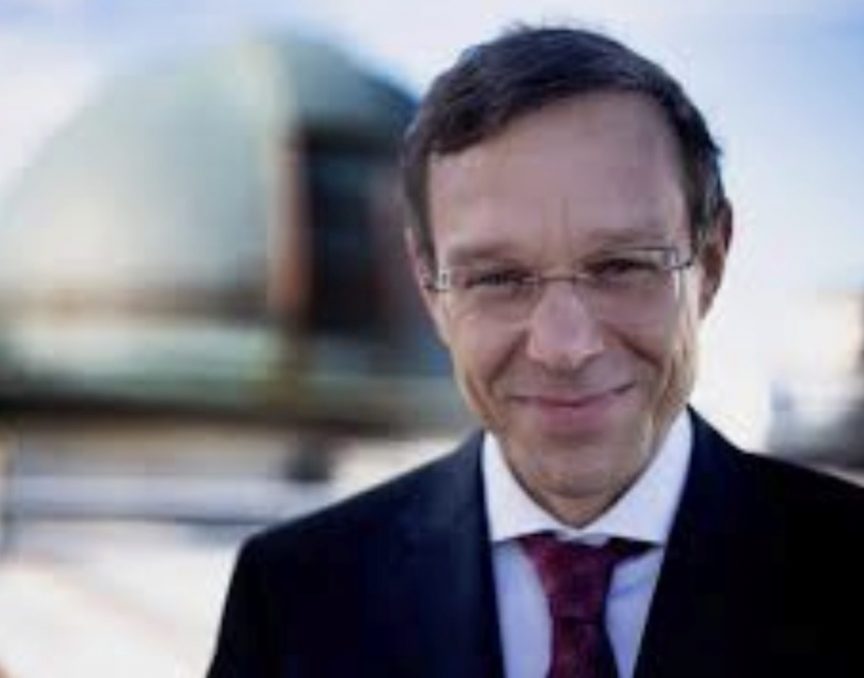 Marina Koren. (2019). When a Harvard Professor Talks About Aliens: News about extraterrestrial life sounds better coming from an expert at a high-prestige institution. The Atlantic.

Astrophysicists usually don’t get chased by reporters, but that’s what happened to Avi Loeb last November.

They bombarded Loeb’s phone lines. They showed up at his office with television crews. One of them even followed him home and confronted him at the front door, demanding Loeb answer a question.

“Do you believe that extraterrestrial intelligence exists?”

Days earlier, Loeb had published a new research paper in an astrophysics journal. Scientists publish thousands of research papers every year in journals big and small, prestigious and obscure. Usually, aside from some basic coverage by science journalists, these papers attract little public attention. But Loeb’s latest work covered a topic that is historically very attention-getting: aliens.

The subject of the paper was a mysterious space rock known as ‘Oumuamua. When it was discovered in October 2017, the rock was the talk of the astronomy community. ‘Oumuamua is the first interstellar object astronomers have seen in our solar system; it did not originate here, but likely traveled for billions and billions of years, past countless other stars, before reaching our own. Telescopes caught it just after it sped past the sun. They can’t see it anymore, but ‘Oumuamua is still going. Eventually, it will cross the edge of our solar system and into interstellar space, again.

The leading hypothesis among astronomers is that ‘Oumuamua is an odd-looking comet, a remnant of another solar system that was kicked out by natural forces and sent barreling through the cosmos.

Loeb offered a different explanation: ‘Oumuamua could be a probe that was deliberately sent to the solar system by an alien civilization.

It’s no surprise that news of Loeb’s theory took off. The detection of extraterrestrial beings, whether they’re the wrinkly ET kind or the teeny microbial type, would most significant scientific discoveries in human history. The thought of finding sapient life beyond Earth, of learning that we are not alone, is exhilarating and disorienting. The suggestion that it might actually have happened is doubly so.

But there’s another reason the paper was so widely covered: Loeb is a tenured Harvard professor.

“If this was some random astronomer that you had never heard of from, say, Equatorial Guinea, you probably wouldn’t write a story on it,” says Bryan Gaensler, the director of the University of Toronto’s Dunlap Institute for Astronomy and Astrophysics, and a former colleague of Loeb’s at Harvard. “There’s a lot of astronomers that have outlandish ideas, and most of them aren’t taken seriously by the community, and most of the time the media don’t really give attention to them.”

Loeb has two decades’ worth of experience and is well regarded in the field. But that background doesn’t come up in the new stories. Harvard does.

Loeb even looks the part of someone you’d believe about, well, an extraterrestrial spaceship zooming past Earth. Bespectacled, with a neat haircut, Loeb is the antithesis of the History Channel’s disheveled, wild-haired man-turned-meme, who mentioned aliens one too many times. If both men approached you on the street and told you aliens existed, which one would you believe?

Several astronomers I spoke with echoed Gaensler’s sentiments. So did Loeb himself. He recognizes that his name-brand employer likely attracted the news organizations—and probably primed their readers to trust him.

“It’s not just affiliation; it’s the fact that I’m chair of the astronomy department [at Harvard],” Loeb said. He rattled off a series of other legitimizing titles: director of the Institute for Theory and Computation; founding director of the Black Hole Initiative; chair of the Board on Physics and Astronomy of the National Academies; chair of the scientific committee for the Breakthrough Starshot Initiative.

Coming from an expert at a high-prestige institution, with credentials in the relevant field, news of an encounter with extraterrestrial life would be more believable to most people, says Michael Varnum, a psychology professor at Arizona State University. Varnum studies a very niche and very relevant topic: how the public might react to the news of an alien discovery.

The prestige effect is magnified, too, “if the evidence or arguments are technical enough that it is not easy for laypeople to understand or evaluate them,” he says. The journalists who cover Loeb make him seem even more trustworthy. “Part of what reinforces that credibility is coverage in news outlets with reputations for serious journalism,” Varnum says.

Loeb, pleasantly surprised by the media reaction, has leaned into the press interest. He has given dozens of interviews to a variety of news organizations since his paper was published in November, from The Verge to The New Yorker.

Some astronomers, however, wish he’d stop.

“‘Oumuamua was exciting, but I’m getting a little frustrated,” says Karen Meech, an astronomer at the University of Hawaii Institute for Astronomy, and one of the people who discovered the interstellar object. “Now it just won’t die.”

Meech, you might have guessed, doesn’t buy Loeb’s theory.

‘Oumuamua is unlike anything else astronomers have seen in the solar system. It doesn’t orbit the sun, like everything else around here. It has an extremely elongated shape. It’s moving very fast, and even seemed to accelerate as it sped through our part of the solar system.

But many astronomers, including those who discovered ‘Oumuamua, say that these features can be attributed to natural phenomena. That acceleration, for instance, could have been caused by icy particles of comet melting in the sun’s warmth.

Astronomers also checked ‘Oumuamua for signs that it came from a technologically advanced alien civilization. (I use “checked” loosely here, because the best way to truly determine where ‘Oumuamua came from is to chase after it with a spacecraft, which modern technology can’t do.) In December 2017, the Green Bank Telescope in West Virginia, one of the world’s most powerful radio observatories, tuned toward ‘Oumuamua and listened for faint radio transmissions. The idea to do it came from Loeb himself.  The telescope didn’t detect anything.

The alien option is the least likely explanation, as history has shown, but it’s always on the table.

“That doesn’t necessarily prove anything, of course,” says Seth Shostak, an astronomer at the SETI Institute. “The fact that we didn’t pick up transmissions doesn’t rule out the possibility that [‘Oumuamua] could be something directed here.”

It’s not the suggestion of alien origins that bugs Meech and other astronomers. When faced with puzzling cosmic phenomena, astronomers must explore myriad possibilities, including extraterrestrial ones. The alien option is the least likely explanation, as history has shown, but it’s always on the table.

What bothers them is how Loeb has presented this potential explanation to the press. Unlike in his paper, which hedges with many a “may” and “might,” the astrophysicist sounds certain in news stories. In The Verge: “I cannot think of another explanation for the peculiar acceleration of ‘Oumuamua.” In The New Yorker: “It is much more likely that it is being made by artificial means, by a technological civilization.” To me, in a recent interview: “In my mind, it’s not speculative at all.”

“It doesn’t look identical to things we would see in our solar system, but why should you expect that if it’s coming from elsewhere?” Meech says. “We would all love to have discoveries of aliens, but if you’re going to go down that route, you have to have ironclad evidence.”

Loeb says that the peculiarities of ‘Oumuamua are evidence. In his view,

The acceleration could be a result of ‘Oumuamua, an artificial probe, taking advantage of free solar energy for an extra push.

Loeb and his colleagues at Breakthrough Starshot, a million-dollar project, are trying to develop such technology, known as lightsails, to send to the star nearest our own. He resists the suggestion that his work is unscientific speculation and says public discussion of potential explanations—all of them—gives laypeople a real-time look at the scientific process.

“Very often scientists say, Let’s not communicate to the public; let’s talk among ourselves,” he said. “They build this ivory tower, don’t explain what they’re doing, and then they come out with a statement once they know the answer.”

Some astronomers are grateful for Loeb’s approach, even if they’re wary of his certainty. “He is using tenure and his stature the way we all imagine it’s supposed to be used: As a shield so that he can explore potentially unpopular research avenues without fear of retribution or ostracism,” Jason Wright, an astronomer at Pennsylvania State University, wrote in a recent blog post. “We all imagine that’s what we would do in his position (I hope!) but too often it ends up just being a club to get junior scientists to conform to one’s vision for what ‘proper’ science looks like and what ‘good’ problems are.”

Wright proposed a controversial theory of his own in 2015, when telescopes detected a strange clump of matter orbiting a nearby star. He and his fellow scientists suggested that the material could be megastructures built by an advanced civilization. A few years later, the same scientists concluded that the megastructures were likely just cosmic dust.

“History is on the side of skepticism when it comes to this stuff,” Shostak says. Scientists who do think we could be closer to discovering extraterrestrial life worry that breathless news coverage of weird cosmic phenomena could negatively affect the reception of the real deal—whenever that comes along.

“If and when we do find extraterrestrials—and I think there’s a real chance that we might detect some sort of life, intelligent or not, in the next decade or two—we’re going to have a ‘boy who cried wolf’ problem,” says Gaensler, the University of Toronto astronomer. “The people who find real evidence of this are probably not going to get the credit they deserve, because we’ve heard this all before.”

In popular culture, Earth’s first encounters with extraterrestrial life are unequivocal. One moment, we’re alone; the next, we can’t deny the existence of aliens. But in reality, the first evidence of alien life—like the early evidence in many scientific breakthroughs—could look much less certain. If there’s one lesson from this story, it’s that the public’s willingness to get excited about it might depend on where the people who first discover aliens work. An Ivy League affiliation wouldn’t hurt.