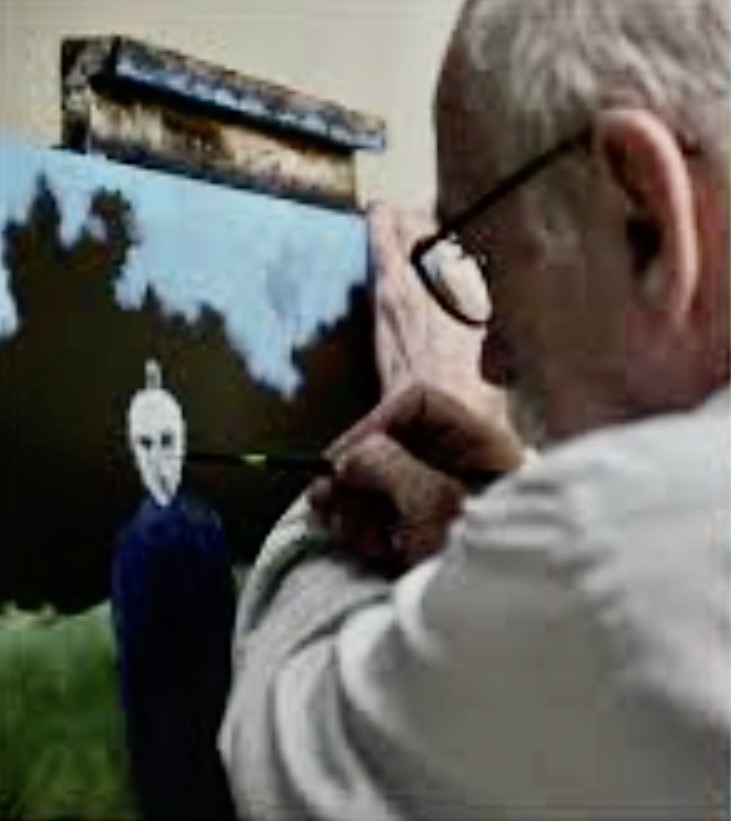 Kara Weisenstein. (2018). This Guy Paints the Sex He Allegedly Has with Aliens. VICE.

“When I was 17, I lost my virginity to a female extraterrestrial,” the 74-year-old says in a documentary about him called  Love and Sausers. “That’s all I can say about it.

The coitus in question allegedly went down in 1961, when Huggins was a teenager living on his parents’ farm in rural Georgia. It wasn’t the first-time extraterrestrials had appeared to him; he’d been seeing strange creatures since he was eight. But on this day, as he was walking through woods near his house, an alien woman appeared and seduced him. “I thought, if anything, I’d be losing it in the backseat of a Ford—something like that. But it didn’t work out that way,” he says in the film.

According to Huggins, these visits from extraterrestrials, and his sexual relationship with them, continued into adulthood. When I interviewed him for this story, Huggins told me his last encounter with Crescent, his name for the woman in the woods, was six months ago. “I was sitting down in a chair, and the woman, Crescent, was behind me, and she put her arms around me,” he said. “And that’s about it. I don’t know anything else outside of that.”

Huggins is unnervingly matter-of-fact when he talks about his encounters. It sets him apart from what most of us expect from truthers and UFO enthusiasts. He’s not in it for the notoriety and doesn’t care if anyone believes him. When Huggins talks about fathering hundreds of alien babies—and yes, that’s another facet of his encounters—he sounds about as even-keeled as a farmer explaining crop rotations.

It’s one of the things that drew filmmaker Brad Abrahams to track Huggins down in Hoboken, New Jersey, where he lives now. Abrahams heard Huggins’s story on a podcast about UFOs and the paranormal. “In a sea of outlandish claims, there was one that rose to the surface,” he said. “And that was David’s story.”

Huggins was born in rural Georgia in 1944. In Love and Saucers, he talks about hunting for arrowheads in nearby fields for fun and not liking the evangelical Baptist church his grandparents took him to sometimes. When strange beings that no one else could see started appearing to him around the farm, he thought he was losing his mind. “I am sitting under a tree, and I hear this voice say, ‘David, behind you.’ And I turned around and there is this little hairy guy with large glowing eyes coming straight towards me. I thought it was the bogeyman. I didn’t know what to think of it,” he says in the film. Another day, an “insect-like being” that reminded Huggins of a praying mantis appeared. “I was very terrified,” he says. “It was like, ‘What in the world am I looking at?’ And for an eight-year-old, you don’t know what to think.”

Once the shock wore off, Huggins says his encounters were weird, but not all that threatening. When he left Georgia in the mid 60s for art school in New York City, the beings followed. Nocturnal visits from Crescent, the ET who deflowered him, became routine. “My relationship with Crescent was warm and friendly. A little strange. What do I mean, a little? Very strange. She was my girlfriend, really,” Huggins says in the film. “A very unconventional relationship,” he adds.

One of the first paintings Huggins ever made was of him and Crescent, having sex. “[The painting’s] not really all that good. She was on top of me, I reach my climax, then she and the insect being leave,” he says. Similar paintings fill his apartment. They’re surreal and a little childlike, dominated by deep blues and greens.

This is another thing that sets Huggins apart from most people with alien abduction stories: He paints his encounters. It started in 1987, when Huggins started remembering details from early visits. He says the deluge was triggered by Budd Hopkin’s ook Intruders: The Incredible Visitations at Copley Woods.

“It was like a compulsion. I was being led to the book,” he says in the film. “There is this chapter ‘Other Women, Other Men,’ and I start reading it. And I go, Oh my God, this is the woman I never told anyone about. As I was reading it, memory upon memory came flooding back. It was image upon image. They wouldn’t stop. I think what bothered me the most is I didn’t know what to do with it. I was so scared.”

“It seemed like he was almost going crazy… from not being able to process these experiences that happened to him. What were they? Why him? It really sounded like he was losing his grip on his life and reality,” Abrahams told me. “And then, apparently, he got this message from [the beings] that he should paint the experiences, and as soon as he started doing that, it changed him.

“He said it was a release. He was able to sleep for the first time in weeks. And since then, he has painted every single detail of every encounter. A hundred-something paintings. It is art therapy. I don’t know if that’s how David would describe it, but that was a big part of what I wanted to show, too. Once he found a way to show the rest of the world, or even just himself, [what happened] visually through art, he was able to process, make sense of, and come to peace with whatever it was that happened to him,” Abrahams said.

What makes Love and Saucers a very good documentary about a man who paints himself having sex with aliens is that Abrahams lays out the details of Huggins’s story and lets viewers come to their own conclusions. At its core, Love and Saucers is a film about belief. The first half is Huggins telling his own story, but the second half is interviews with his friends and neighbors. Some of them weren’t aware of Huggins’s encounters beforehand. But they all believe him.

Then there is Jeffrey Kripal,  a professor of philosophy and religious thought at Rice University in Texas. He spent the early part of his career studying erotic mysticism, which led him to study alien abduction literature. “The whole history of religions is essentially about weird beings coming from the sky and doing strange things to human beings, and historically, those events or encounters have been framed as angels or demons or gods or goddesses or what have you. But in the modern, sort of secular, world we live in, they get framed as science fiction,” he says in Love and Saucers.

Kripal believes Huggins. He says the mix of terror and euphoria Huggins describes lines up with age-old descriptions of humans encountering the sacred. Plus, details of Huggins’s abductions mirror those described by other people Kripal has interviewed who believe they’ve had supernatural experiences. “I’m completely convinced they’re not lying; they’re being very sincere. But again, what it is is an entirely different question, and that’s where I think we need a lot more humility,” he says.

…both the Hills’ watches mysteriously stopped running on the night of their experience.

Whether or not you think Huggins has really been having sex with aliens for the past 50 years, what’s apparent is that Huggins himself believes it. “Consider that this man isn’t lying and that he’s communicating something that he’s experienced, but it doesn’t have to be taken literally. Someone cannot be crazy but still claim to have these completely unexplainable experiences,” Abrahams said.

What I think is more fascinating than whether or not “the truth is out there” is what stories like Huggins’s say about the impulse to explain away what we do not understand, and our limited ability to interpret all the sensations, experiences, and randomly firing neurons that come with being human.

When I asked Huggins why he thinks the beings appear to him, he said, “I have a feeling that tens of millions of people, perhaps hundreds of millions, have had [similar] experiences. Mainly as children. That’s all I can really say, but I think as children we are so open to things, that these beings can appear to us. I know I never closed up on it, because it has continued through my whole life.”