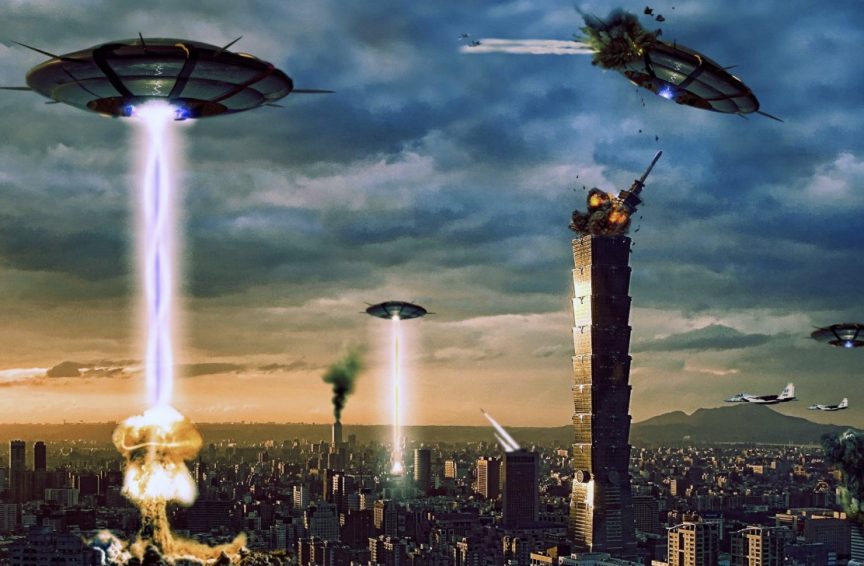 Since alien invasion movies are produced in close cooperation with the Pentagon (to access military hardware and technical advice), if Hollywood could promote the idea that we beat alien invaders, then maybe the public would be more open to disclosure.

Through the annals of Hollywood history there have been reoccurring themes of the invasion angles, and “evil alien” agenda with films like Independence Day and Mars Attacks! There have also been the lighthearted friendly alien movies like E.T. and Paul to counter the blow’em up popcorn flicks, which could all be part of the idea that Hollywood is in on the plan for a slow disclosure that includes pop culture. In these invasion films, despite being technologically disadvantaged in every way possible, humanity finds a way to win, but is this scenario even possible?

UFOs are embedded in pop culture with a rich history in film, TV and multi-media. In many sci-fi and horror films, the aliens are depicted as hostile, and a threat, but earth prevails in the end, which may not be accurate if an actual invasion were to ever happen. So, why push the idea that we could survive? Is this to soften the blow that we cannot, or is it to stop mass hysteria if truth ever came out?

“In most UFO invasion movies, humans – typically Americans – ultimately conquer the aliens because audiences tend to prefer their blockbusters to have upbeat endings, or at least for the good guys to come out on top,” said Robbie Graham author of Silver Screen Saucers (2015). “Downbeat endings rarely equate to big bucks at the box-office, and so it’s just good business sense to have the humans defeat the aliens.

Over the past 20 years, an increasing number of alien invasion movies have been produced with the close co-operation of the Pentagon, which uses Hollywood whenever possible as a crucial conduit for political and militaristic messages. It’s an arrangement in which various branches of the military provide filmmakers with expensive hardware and on-set advice ostensibly to help make the film more authentic and to help craft a positive image of America’s armed forces, but this cozy, symbiotic arrangement also allows for the military to directly shape the content of the movies in which they are involved at every stage of the production including the script-writing stage. As a result, in theory, the Pentagon can insert all sorts of messages and ideas into Hollywood narratives, including those of UFO and alien invasion movies.

We need only look at Pentagon-backed products like Battleship and the ‘Transformers’ franchise to see how the US military envisions itself defeating an extraterrestrial foe, and naturally it’s in the interests of the Pentagon to portray itself as being only too capable of defending America from any form of enemy, whether they’re from Russia or Zeta Reticuli.”

War Of The Worlds by H.G. Wells was about a sci-fi novel about a Martian invasion, and was adapted to American radio in 1938 by Orson Wells, and caused real panic since many listeners many believed it was an actual invasion.

Films about UFOs (E.T. and Close Encounters Of the Third Kind, for example) were allegedly encouraged by the government to likely get the public’s mind off actual sightings.

The public was to be entertained, and this was “camouflage through limited disclosure” as alleged in the 1994 book The Day After Roswell by former Pentagon official Col. Phillip J. Corso who worked close on U.S. government projects regarding reverse-engineering alien technology from the Roswell crash.

“In decades past, the Pentagon flatly refused to involve itself in any movie depicting UFOs or aliens,” said Graham. “That’s changed in recent years, however. Today, every branch of the U.S. military is only too willing to lend support to UFOlogy-inspired entertainment products. Can this be interpreted as an indirect acknowledgement of UFO reality? Perhaps. Or perhaps the Pentagon realizes that, when it comes to boosting military recruitment, it can no longer afford to be picky about the genres with which it associates itself.”

If you take into account the recent Pentagon UFO / Gimbal/ Nimitz encounter mainstream UAP stories you’ll notice they all have credible, military witnesses baffled by a craft that moved in way that defied all physics. Our planes couldn’t keep up, catch or replicate the technology of the Tic Tac and the other UAPs caught on camera, and eventually released in conjunction with To the Stars Academy of Arts and Science.

There have also been reports through time of UFOs showing up around nuclear plants, and common appearances among military bases with some reports of the UFOs being able to disable firepower and other human-invented tech. There’s the claim that an Italian helicopter was attacked by UFOs, and various other historical Interference from all over the world.

On Thursday, To the Stars Academy of Arts and Science announced a partnership with the U.S. Army to “advance TTSA’s materiel and technology innovations” and “leverage developments in material science, space-time metric engineering, quantum physics, beamed energy propulsion, and active camouflage” according to the news release.

By nature, the idea of foreign vehicles in our airspace is indeed a “threat” regardless of hostility levels, but what we see here is an example of a government institution attempting to amp up their tech game.

“A lot of the time we think of this technology in small ways since we assume that the organisms we would be up against would simply be like another tribe of humans, but perhaps with more advanced technology or something,” said Chris Cogwell, the former MUFON director of research/ current host of the Mad Scientist podcast who has a PhD in chemical engineering. “To me that is a woefully naive view.

MarketWatch columnist Jurica Dujmović theorizes that the Tic Tac, which pilots couldn’t get a lock on, believes the UAP is military-made even though his article states if the UAP was manned by a human “ the vehicle would have to be equipped with the technology capable of reducing the inertial mass of the object by generating gravity waves to reduce G-forces during acceleration.”

Technology aside, a common feeling among abduction experiences are feelings of helplessness, paralysis, and memory loss. So, if an advanced civilization were able to manipulate us, capture us, and contact through consciousness then do we have any way to combat this when most mainstream science will shy away from this idea?

In Silver Screen Saucers Graham quotes theoretical physicist Michio Kaku, as he compared an alien-threat versus humans stand-off as “Bambi meets Godzilla” with the earthlings being Bambi here. Kaku also offers the warning in the book of “we would present no military challenge to such an advanced civilization… We would be a pushover for them; forget all the Hollywood movies.”

All these factors make the idea of a Space Force even more questionable since our technology may be considered primitive while standing next to advanced civilizations.

Ultimately, if Hollywood could promote the idea that we could win an “alien war,” then maybe the public will be more at ease with “disclosure” one day.