An extremely compelling case of an invading UFO occurred in Tehran, Iran in September of 1976. On the 19th, the Air Force of Iran began receiving calls from local citizens reporting an unusual, unidentifiable object in the skies.

Around 10:30 p.m. on the night of September 18, 1976, Hossein Pirouzi, an experienced air traffic controller working at Mehrabad Airport in Tehran, received a call from a woman northeast of the airport who saw a luminous object glowing red, yellow, and orange. It was shaped like a four-blade fan, and seemed to split in two. The Air Force duty officer called the Assistant Deputy Commander of Operations informing him of the situation and asking for guidance in how to handle the situation. He knew there were no planes flying at the time that could account for the strange reports. At first Yousefit thought the edgy citizens were seeing just stars or the planet Venus, but after even more inquiries, he decided to look for himself.

“Pirouzi stepped outside to look through his binoculars. He guessed that it was 8 meters wide, or just over 26 feet. Eachend was glowing blue, and a red light was making an orbit around the center every second or two and pausing every 90 degrees. The entire cylinder was rocking back and forth like a seesaw. As it got closer, Pirouzi saw it slowly change into a drooping starfish with a green body and a core that glowed like red-hot coal. Its arms were dark orange but faded to yellow at the tips.”

He made the decision to scramble an F-4 jet from Shahrokhi Air Force Base to get a closer look at the unusual object. The plane left the runway at approximately 1:30 AM to intercept the UFO. The plane sped toward the large, bright unknown which lay some 70 miles north of them. About half-way there, the plane began to experience communication problems. Instrumentation was also faulty, so the pilot dropped off course, heading back to Shahrokhi. As the F-4 changed course, instrumentation and communication was suddenly restored. Even at Mach 2, Nazeri was unable to close in. Had the UFO compromised the plane’s functions as it approached, and then allowed them again as the plane dropped from its course? 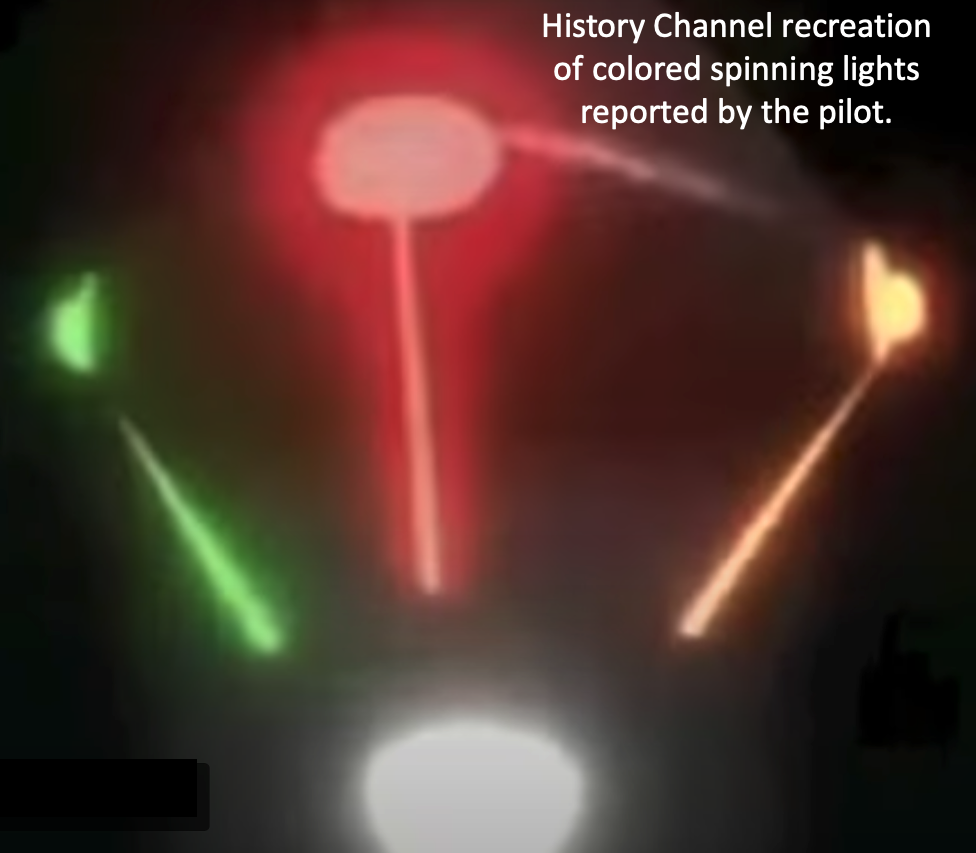 Another F-4 left the air base, attempting to identify the UFO. As the second jet approached the UFO, they made radar contact. Crew members stated that the size of the radar return was similar to that of a 707 jet. The actual size of the object was impossible to determine visually because of the brilliance of the glowing object.

The jet drew nearer to the UFO. For a time, the F-4 bridged the distance between itself and the UFO, but even flying above Mach 1, the UFO suddenly shot away from the F-4. This incredible burst of speed was confirmed by the plane’s radar and also visually. every time they closed within 46 k.m., or 31 miles, the object sped away or “jumped” positions in the sky. Jafari calculated that it once jumped more than 43 kilometers, or 27 miles, in an instant. The crew of the plane would later say that the UFO had strobing lights arranged rectangularly. The lights alternated from red, blue, green, and orange in color.

The plane’s crew was astonished to see another, smaller object emerge from the large UFO. The smaller object made a beeline to the F-4 moving at incredible speeds. Yousefi ordered Jafari to shoot down the UFO, but before the pilot could act on his orders, his firing control panel went dead.

The plane’s crew was astonished to see another, smaller object emerge from the large UFO. The plane and the UFO are now flying south of Tehran. The smaller object made a beeline to the F4 moving at incredible speeds. Fearing for their very lives, the pilot aimed a AIM-9 missile at the approaching object, but just as he did, the weapons control panel went off-line, and he lost all communication.

The only course of action left was to dive to try to avoid a collision with the approaching UFO or weapon. The approaching object followed the plane into its dive briefly, but then tailed off, and returned to the larger UFO. All functions were again online as the UFO left the jet behind.

There was never an explanation for what two F-4 jets chased over the skies of Tehran.

The Tehran UFO was noteworthy for two behaviors in particular: for repeatedly changing form, and for splitting in two and rejoining as one. These are both behaviors that one would not expect of any conventional craft, but that are often seen from UFOs – in fact, many UFOs seem to have no physical structure at all. But what really makes the Tehran case stand out among other sightings is the strength of the evidence.

There were multiple trained, independent witnesses with vastly different perspectives on the UFO; visual observations that were corroborated by radar data; and several sightings that corresponded with equipment failures and physiological reactions in the witnesses.

The event is a case-in-point for the fact that pilots and air traffic controllers do see UFOs, and track them on radar, and will speak about their experiences when given the freedom to do so. The Iranian Air Force’s relatively open approach to the investigation shows that greater transparency is possible in UFO research, but the hidden involvement of the US government suggests that there is still a lot left learned in secret.