A group of UFO researchers with backgrounds in science have come together to analyze an alleged UFO video they have confirmed comes from the Department of Homeland Security (DHS). The object in the video was captured by a thermal imaging camera on a DHS aircraft, and according to the researchers, it exhibits characteristics that cannot be explained by any known aircraft or natural phenomenon.

The video is overlaid with the sort of telemetry one would expect from a military or law enforcement thermal image video. It shows an object apparently moving very quickly over land and then into the ocean. It seems to be tumbling or changing shape. It moves over buildings, through trees, and eventually over the ocean. Then things get weird. The object appears to go in and out of the ocean without slowing down, and at the end of the video is either joined by another object or breaks in two.

All of the primary witnesses have requested anonymity. However, several communications from alleged DHS employees indicate that the video caused quite a stir on the base.

Research on the video began when an acquaintance to the pilot of the aircraft that captured the video contacted Daina Chaviano, a famous Cuban-born fantasy and science fiction author. She is also a volunteer with the Mutual UFO Network (MUFON) in Florida, where in her spare time she investigates UFO reports. She took the UFO case to her colleague, Morgan Beall, who runs the Florida MUFON chapter.

Chaviano and Beall were so impressed by what they saw they assembled a small group of skeptical researchers with backgrounds in various fields of science and technology. The pilot’s acquaintance requested strict control of the information provided and that knowledge of the investigation be limited to a very few people, so until now, the researchers have not shared any information regarding their investigation.

Today, the group released a 161-page report detailing their findings.

They are vague when it comes to the identity of Chaviano’s informant. They say this person and others who provided information wanted to remain anonymous “to ensure no issues arise with the source’s employers.” However, the group says: “The source of this video evidence was vetted and identified.” They say they are absolutely certain that the information comes from sources on board the DHS aircraft and the video is genuine. Their investigation also confirmed what they were told.

Their sources told them that the UFO incident began at about 9:20 pm on the evening of April 25, 2013 at the Rafael Hernandez Airport in Aguadilla, Puerto Rico. It involved the crew of a DHC-8 Turboprop aircraft from U.S. Customs and Border Protection (CBP), a division of DHS.

The DHC-8 took off on a routine flight and soon after takeoff they noticed “a pinkish to reddish light over the ocean that was in their vicinity and approaching toward the south.”  The crew was concerned the tower had not told them about the incoming traffic, so they called it in. The tower told them they also had a visual on the object, but they were unsure of its identity.

Once the object got close to land, its lights turned off, but at this time the DHC-8 was able to begin tracking and filming the object with their onboard thermal imaging system. The DHC-8 did not approach the object, but circled the area and filmed it.

The DHC-8 did not pick up the object on radar. However, their radar was looking downward to track ships on the ocean, not objects in the sky.

According to the source, a flight was delayed by the presence of the object. The research group was able to confirm from airport records that a FedEx flight scheduled to leave at 9:10 pm was delayed until 9:26 pm.

The researchers also confirmed the flight time and path of the DHC-8 via radar data they obtained from a Freedom of Information Act Request to the U.S. Air Force 84th Radar Evaluation Squadron (RADES) group. The radar data confirmed that the DHC-8 took off at approximately 9:16 pm and circled the airport twice before leaving the area about 10 minutes later.

The researchers note that there was an unknown object or objects tracked on radar a few minutes prior to the DHC-8’s take off, but it is not known for certain that this was the same object that was later caught on video. The unidentified radar strikes were just off the shore to the north and northwest of the airport and lasted about 16 minutes from 8:58 pm to 9:14 pm.

When reading the times, the radar data is presented in a different time zone than the local times. The researchers explained this on their website: “Aviation times reflect  Zulu time which corresponds to Greenwich Mean Time (GMT). The video displays the Zulu time April 26th at 1:22 AM at the top left of the initial frames. Converting this Zulu time to Puerto Rico’s local time gives April 25th at 9:22 PM. Puerto Rico uses  Atlantic Standard Time and does not use daylight savings time.”

The research group also thoroughly analyzed the video to determine the nature of the object in the film. They consulted thermal imaging experts to determine the capabilities of the system used for the filming, and broke the film down frame by frame to determine the object’s approximate size, speed, temperature and flight path.

The video  is just under 4 minutes long, but the unknown object was tracked for about 2 1/2 of those minutes. Although it was difficult for the group to calculate the exact location of the object on the first half of its flight, they are confident of its position in the second half. They have determined that the object came in from the ocean, from the north or northwest of the airport’s airstrip, and then flew over the airstrip, then turned back to the north and headed back out into the ocean.

The report states: “The object was between three to five feet in length and its speed varied between approximately 40 mph to 120 mph. Its median speed was roughly 80 mph.”

The report goes on to note that an interesting characteristic at the end of the flight was when it apparently submerged into the ocean, traveled for over half a mile, and then flew back out. According to the report: “Its speed through the water reached a high of 95 mph and average 82.8 mph.” 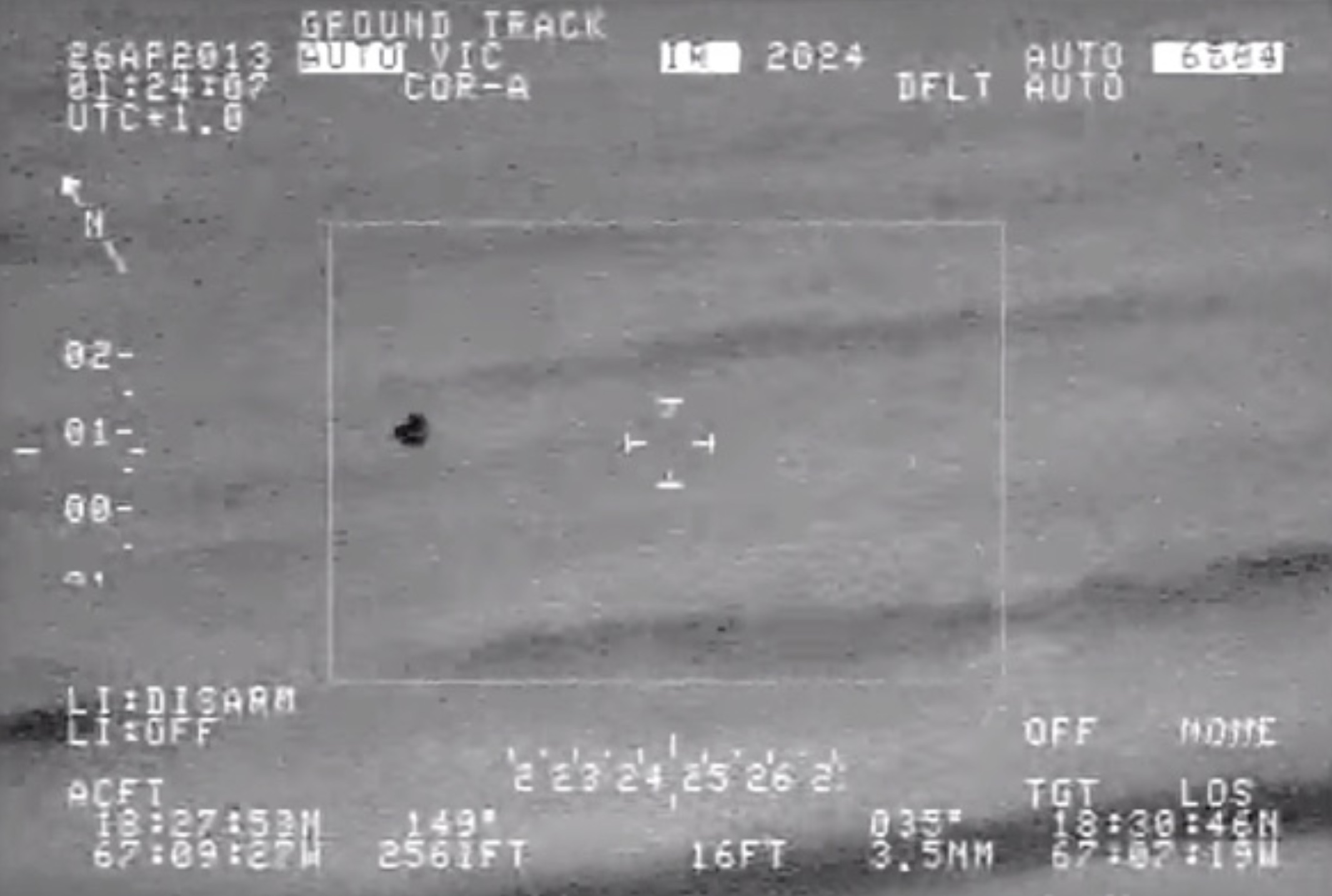 The unknown object returning to the ocean.

One suggestion has been that the object was merely a balloon. However, the researchers reject this idea for several reasons. They say the wind speeds at the time were 8 to 13 mph at ground level and 12 to 18 mph at 400 to 3200 feet. This means the object was moving too fast to be carried by wind currents. It also changed directions from heading south back to the north, and it went underwater with minimal loss of speed.

Another possibility is that the object was actually a bird. The object appears dark on the screen, and for this type of thermal imaging that would mean it was warmer than the ambient air. This is how a bird would appear. However, the researchers note that the object was moving much too fast to be a bird. They note that peregrine falcons, which do occasionally visit Puerto Rico, have an average horizontal speed of 40 to 56 mph, and a maximum of 65 to 69 mph.

The researchers also examined the possibility that the object was a drone. Their research did discover that the Navy is working on a drone that can fly through the air and dive into the ocean and become a submarine. It is called a “Flimmer.” They found that current Flimmer drones have not been tested underwater and have an airspeed of 68 mph. They also noted that the fastest known underwater battery powered torpedo travels at 50 mph.

The researchers do acknowledge that it could be possible that the Navy is secretly testing a Flimmer drone that is much more advanced. However, they question why the military would so recklessly test it over a civilian area and airport runways.

In conclusion they state:

“There is no explanation for an object capable of traveling under water at over 90 mph with minimal impact as it enters the water, through the air at 120 mph at low altitude through a residential area without navigational lights, and finally to be capable of splitting into two separate objects. No bird, no balloon, no aircraft, and no known drones have that capability.”

They do not profess to know what the object was, and they welcome “reasonable” suggestions. However, as to be expected, there are those who have suggested that “they know” the object is extraterrestrial in nature, and at least one of those suggestions has come from an anonymous source who has intimate knowledge of this event.