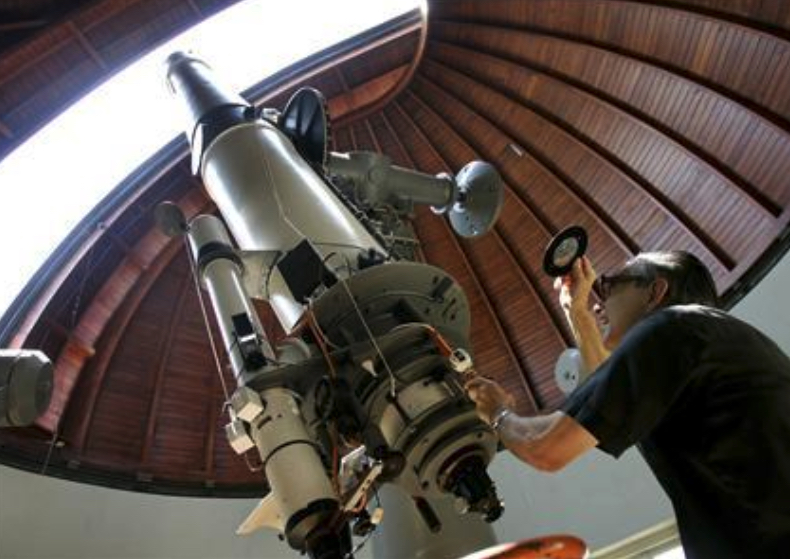 Photo: Father Emmanuel Carreira operates the telescope at the Vatican Observatory in Castelgandolfo, south of Rome, in this June 23, 2005 file photo. REUTERS/Tony Gentile

VATICAN CITY (Reuters)—The Vatican’s chief astronomer says there is no conflict between believing in God and in the possibility of “extraterrestrial brothers” perhaps more evolved than humans.

“In my opinion this possibility (of life on other planets) exists,” said Rev. José Gabriel Funes, a 45-year-old Jesuit priest who is head of the Vatican Observatory and a scientific adviser to Pope Benedict.

How can we exclude that life has developed elsewhere?

“How can we exclude that life has developed elsewhere,” he told the Vatican newspaper L’Osservatore Romano in an interview in its Tuesday-Wednesday edition, explaining that the large number of galaxies with their own planets made this possible.

Asked if he was referring to beings similar to humans or even more evolved than humans, he said: “Certainly, in a universe this big you can’t exclude this hypothesis.”

In the interview headlined, “The extraterrestrial is my brother,” he said he saw no conflict between belief in such beings and faith in God. “Just as there is a multiplicity of creatures on earth, there can be other beings, even intelligent, created by God. This is not in contrast with our faith because we can’t put limits on God’s creative freedom,” he said.

“Why can’t we speak of a ‘brother extraterrestrial’? It would still be part of creation,” he said.

Funes, who runs the observatory, which is based south of Rome and in Arizona, held out the possibility that the human race might actually be the “lost sheep” of the universe.

“There could be (other beings) who remained in full friendship with their creator,” he said.

Christians have sometimes been at odds with scientists over whether the Bible should be read literally and issues such as creationism versus evolution have been hotly debated for decades.

Funes held out the possibility that the human race might actually be the “lost sheep” of the universe.

The Inquisition condemned astronomer Galileo in the 17th century for insisting that the earth revolved around the sun. The Catholic Church did not rehabilitate him until 1992.

Funes said dialogue between faith and science could be improved if scientists learned more about the Bible and the Church kept more up to date with scientific progress.

Funes, an Argentine, said he believed as an astronomer that the most likely explanation for the start of the universe was “the big bang”, the theory that it sprang into existence from dense matter billions of years ago.

But he said this was not in conflict with faith in God as a creator. “God is the creator. There is a sense to creation. We are not children of an accident …,” he said.

“As an astronomer, I continue to believe that God is the creator of the universe and that we are not the product of something casual but children of a good father who has a project of love in mind for us,” he said.