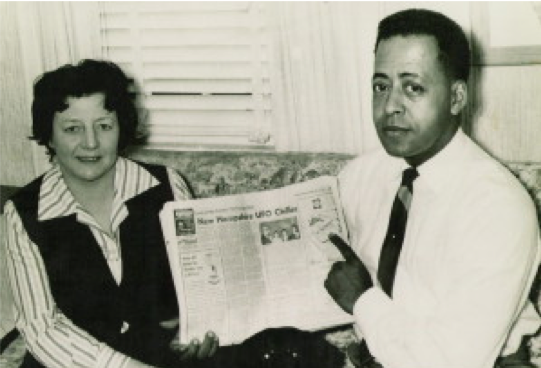 This is the first mention in UFO folklore of the so-called “greys”: bald-headed alien beings, about five-foot-tall, with greyish skin, pear shaped heads and slanting cat-like eyes.

New Hampshire — the “Live Free or Die” state — has done something that may surprise UFO believers as well as skeptics. It has just erected a historical marker commemorating the 50th anniversary close encounter of Betty and Barney Hill.

The Hills’ story is undoubtedly the most famous of all UFO experiences because (as the official plaque reads) it was “the first widely-reported UFO abduction report in the United States.”

It was also the first time that anyone in this country had reported undergoing invasive physical examinations at the hands of short, “grey” aliens. 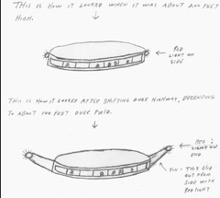 “To tell you the truth, we were very excited about the prospect,” said Elizabeth Muzzey, director of the N.H. Division of Historical Resources, which created the new historic plaque.

“We have more than 200 markers across the state and to have a 20th Century marker topic like this, we thought, was terrific and it’s certainly a great historical challenge,” Muzzey told The Huffington Post.

Historical challenge, indeed, considering the ongoing debate over whether or not the Hills — both deceased — actually were kidnapped onto an alien spacecraft 50 years ago.

Pease Air Force Base reported, “The UFO was also confirmed by our radar.”

Late at night on Sept. 19, 1961, they were driving through the White Mountains of New Hampshire, returning from a Canadian vacation to their home in Portsmouth when they spotted an object in the sky with lights, which at first seemed like an airplane. But when the “airplane” began to rapidly descend in their direction, they quickly continued driving south along Route 3.

Just south of the Indian Head resort, the Hills stopped in the middle of the road and said the silent, cigar-shaped craft hovered above their car. Through binoculars, Barney claimed to see several “strangely not human” figures at the object’s windows. Fearing they were about to be captured, Barney quickly drove away.

The next thing the Hills remembered was that they were 35 miles farther along on their journey and approximately two hours had passed which they couldn’t account for. This amnesia continued to bother them, leading to physical and mental disorders until finally, three years after the experience, time-regression hypnosis was used to extract the lost information. Under separate hypnotic sessions, the Hills produced details of a reported kidnapping by aliens on board a spacecraft.

The Hills were taken into separate rooms during their examinations. These “tests” involved both physical and mental procedures. As part of these tests, skin, hair and nail samples were taken. Betty had a long needle inserted into her navel and was told it was a pregnancy test. Under duress, Barney related that he had given a semen specimen. Betty stated that she was given a kind of book as a token of her visit, but this item was later taken back.

Among the various odd things about this case that were verified: both the Hills’ watches mysteriously stopped running on the night of their experience; the tops of Barney’s shoes somehow got severely scraped; Betty’s dress had a 2-inch tear at the top of the zipper, was also torn from the waist to the hemline and the hem was torn down on one side; and they found shiny circles on the trunk of their car which caused the needle of a compass to spin rapidly when it was brought close to the trunk.

The Hills’ encounter became the subject of many books and a 1975 TV movie, The UFO Incident, starring James Earl Jones and Estelle Parsons.

In 2008, Kathleen Marden, the Hills’ niece, became part of a campaign trying to get New Hampshire to create a historic landmark about her aunt and uncle’s experience. She contacted the department of cultural resources at the N.H. Division of Historical Resources in Concord.

“I was told that everything I submitted had to be backed up with a bibliography, and all of the text [for the marker] had to be footnoted,” Marden told The Huffington Post. “It was a very long process to compile everything and I sent them a lot of material. The state asked me to prove every statement that I made — I had to back up everything with source materials to indicate that I was being accurate.”

“I had given up hope, thinking that the funding wouldn’t be allocated or that the state of New Hampshire had decided not to do this, but they told me the funding had been granted for this plaque to be erected, and they wanted some information about where I thought I would like for it to be.”

It was decided to put the historic marker at the Indian Head resort because that location had been an important part of the Hills’ original 1961 experience.

The commemorative sign, displaying the official New Hampshire state seal, and titled “Betty and Barney Hill Incident,” was unveiled on July 20 and reads:

On the night of September 19-20, 1961, Portsmouth, N.H., couple Betty and Barney Hill experienced a close encounter with an unidentified flying object and two hours of “lost” time while driving south on Rte 3 near Lincoln. They filed an official Air Force Project Blue Book report of a brightly-lit cigar-shaped craft the next day, but were not public with their story until it was leaked in the Boston Traveler in 1965. This was the first widely-reported UFO abduction report in the United States.

At the New Hampshire Division of Historical Resources, Muzzey described how they decided on the exact text to use for the UFO marker.

“We thought about the 1950s and ‘60s in our country when there was such widespread interest in things such as space travel and space exploration. And in all the years since, there have been a great number of people who have asked whether other forms of life may exist out there in the solar system and beyond,” she said.

“Certainly, the experience of the Hills falls right at the center of that cultural and scientific experience,” Muzzey added. “So that’s what we are presenting in the marker — that this was the first widely reported UFO abduction report in the U.S., and a ton have since followed.”

Whether one believes or doubts that the Hills were kidnapped by aliens, what stands out about them is that they were highly credible, reliable people. Betty was a social worker and Barney had been appointed by the governor of New Hampshire to serve on the state advisory committee to the U.S. Civil Rights Commission. After campaigning for Lyndon Johnson’s successful 1964 presidential run, the Hills and Marden were invited to Johnson’s 1965 inauguration.

While the Hills’ historical highway marker is now up and available for all to see, a special 50th anniversary celebration of their UFO experience will take place at the Indian Head resort on Sept. 23-25.

Editor’s note: We also encourage people to take a look at the following two books which were both published in 2007. They provide an in-depth examination of the case and demonstrate why this case has remained a fascinating and enigmatic UFO abduction case: Captured: The Betty and Barney Hill UFO Experience: The True Story of the World’s First Documented Alien Abduction by Stanton T. Friedman and Kathleen Marden. Encounters at Indian Head: the Betty and Barney Hill UFO Abduction Revisited edited by Karl Pflock and Peter Brookesmith.