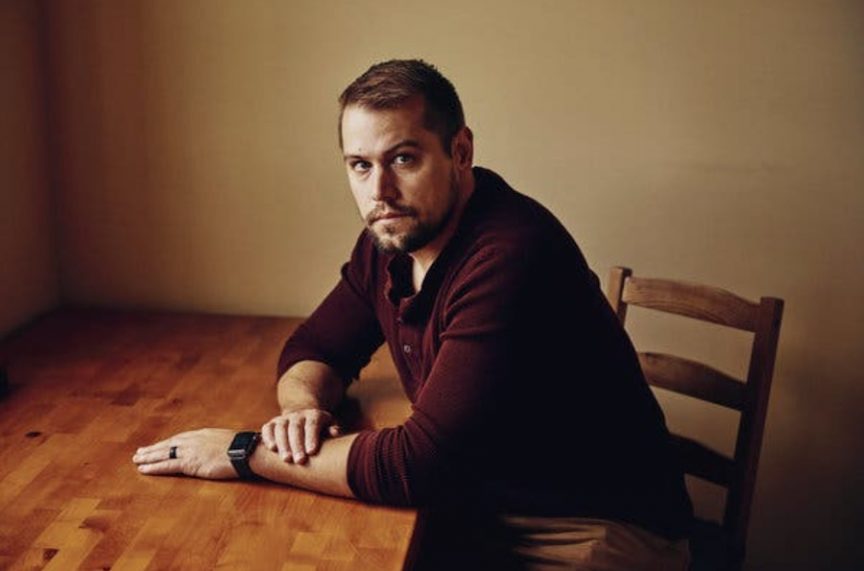 “These things would be out there all day,” Lt. Ryan Graves said. “Keeping an aircraft in the air requires a significant amount of energy. With the speeds we observed, 12 hours in the air is 11 hours longer than we’d expect.”

The strange objects, one of them like a spinning top moving against the wind, appeared almost daily from the summer of 2014 to March 2015, high in the skies over the East Coast. Navy pilots reported to their superiors that the objects had no visible engine or infrared exhaust plumes, but that they could reach 30,000 feet and hypersonic speeds.

“These things would be out there all day,” said Lt. Ryan Graves, an F/A-18 Super Hornet pilot who has been with the Navy for 10 years, and who reported his sightings to the Pentagon and Congress. “Keeping an aircraft in the air requires a significant amount of energy. With the speeds we observed, 12 hours in the air is 11 hours longer than we’d expect.”

The strange objects, one of them like a spinning top moving against the wind, appeared almost daily from the summer of 2014 to March 2015.

In late 2014, a Super Hornet pilot had a near collision with one of the objects, and an official mishap report was filed. Some of the incidents were videotaped, including one taken by a plane’s camera in early 2015 that shows an object zooming over the ocean waves as pilots question what they are watching.

No one in the Defense Department is saying that the objects were extraterrestrial, and experts emphasize that earthly explanations can generally be found for such incidents. Lieutenant Graves and four other Navy pilots, who said in interviews with The New York Times that they saw the objects in 2014 and 2015 in training maneuvers from Virginia to Florida off the aircraft carrier Theodore Roosevelt, make no assertions of their provenance.

But the objects have gotten the attention of the Navy, which earlier this year sent out new classified guidance for how to report what the military calls unexplained aerial phenomena, or unidentified flying objects.

Joseph Gradisher, a Navy spokesman, said the new guidance was an update of instructions that went out to the fleet in 2015, after the Roosevelt incidents.

“There were a number of different reports,” he said. Some cases could have been commercial drones, he said, but in other cases “we don’t know who’s doing this, we don’t have enough data to track this. So the intent of the message to the fleet is to provide updated guidance on reporting procedures for suspected intrusions into our airspace.”

The sightings were reported to the Pentagon’s shadowy, little-known Advanced Aerospace Threat Identification Program, which analyzed the radar data, video footage and accounts provided by senior officers from the Roosevelt. Luis Elizondo, a military intelligence official who ran the program until he resigned in 2017, called the sightings “a striking series of incidents.”

Navy pilots from the VFA-11 “Red Rippers” squadron aboard the aircraft carrier Theodore Roosevelt in 2015. The squadron began noticing strange objects just after the Navy upgraded the radar systems on its F/A-18 fighter planes.

The program, which began in 2007 and was largely funded at the request of Harry Reid, the Nevada Democrat who was the Senate majority leader at the time, was officially shut down in 2012 when the money dried up, according to the Pentagon. But the Navy recently said it currently investigates military reports of U.F.O.s, and Mr. Elizondo and other participants say the program — parts of it remain classified — has continued in other forms. The program has also studied video that shows a whitish oval object described as a giant Tic Tac, about the size of a commercial plane, encountered by two Navy fighter jets off the coast of San Diego in 2004.

Leon Golub, a senior astrophysicist at the Harvard-Smithsonian Center for Astrophysics, said the possibility of an extraterrestrial cause “is so unlikely that it competes with many other low-probability but more mundane explanations.” He added that “there are so many other possibilities — bugs in the code for the imaging and display systems, atmospheric effects and reflections, neurological overload from multiple inputs during high-speed flight.”

Lieutenant Graves still cannot explain what he saw. In the summer of 2014, he and Lt. Danny Accoin, another Super Hornet pilot, were part of a squadron, the VFA-11 “Red Rippers” out of Naval Air Station Oceana, Va., that was training for a deployment to the Persian Gulf.

The squadron began noticing strange objects just after the Navy upgraded the radar systems on its F/A-18 fighter planes.

The pilots began noticing the objects after their 1980s-era radar was upgraded to a more advanced system. As one fighter jet after another got the new radar, pilots began picking up the objects, but ignoring what they thought were false radar tracks.

“People have seen strange stuff in military aircraft for decades,” Lieutenant Graves said. “We’re doing this very complex mission, to go from 30,000 feet, diving down. It would be a pretty big deal to have something up there.”

But he said the objects persisted, showing up at 30,000 feet, 20,000 feet, even sea level. They could accelerate, slow down and then hit hypersonic speeds.

Lieutenant Accoin said he interacted twice with the objects. The first time, after picking up the object on his radar, he set his plane to merge with it, flying 1,000 feet below it. He said he should have been able to see it with his helmet camera, but could not, even though his radar told him it was there.

A few days later, Lieutenant Accoin said a training missile on his jet locked on the object and his infrared camera picked it up as well. “I knew I had it, I knew it was not a false hit,” he said. But still, “I could not pick it up visually.”

At this point the pilots said they speculated that the objects were part of some classified and extremely advanced drone program.

But then pilots began seeing the objects. In late 2014, Lieutenant Graves said he was back at base in Virginia Beach when he encountered a squadron mate just back from a mission “with a look of shock on his face.”

He said he was stunned to hear the pilot’s words. “I almost hit one of those things,” the pilot told Lieutenant Graves.

The pilot and his wingman were flying in tandem about 100 feet apart over the Atlantic east of Virginia Beach when something flew between them, right past the cockpit. It looked to the pilot, Lieutenant Graves said, like sphere encasing a cube.

The incident so spooked the squadron that an aviation flight safety report was filed, Lieutenant Graves said.

The near miss, he and other pilots interviewed said, angered the squadron, and convinced them that the objects were not part of a classified drone program. Government officials would know fighter pilots were training in the area, they reasoned, and would not send drones to get in the way.

“It turned from a potentially classified drone program to a safety issue,” Lieutenant Graves said. “It was going to be a matter of time before someone had a midair” collision.

“Speed doesn’t kill you,” Lieutenant Graves said. “Stopping does. Or acceleration.” Asked what they thought the objects were, the pilots refused to speculate.

“We have helicopters that can hover,” Lieutenant Graves said. “We have aircraft that can fly at 30,000 feet and right at the surface.” But “combine all that in one vehicle of some type with no jet engine, no exhaust plume.”

Lieutenant Accoin said only that “we’re here to do a job, with excellence, not make up myths.”

What was strange, the pilots said, was that the video showed objects accelerating to hypersonic speed, making sudden stops and instantaneous turns — something beyond the physical limits of a human crew.

In March 2015 the Roosevelt left the coast of Florida and headed to the Persian Gulf as part of the American-led mission fighting the Islamic State in Iraq and Syria. The same pilots who were interacting with the strange objects off the East Coast were soon doing bombing missions over Iraq and Syria. The incidents tapered off after they left the United States, the pilots said.