Jack Brewer. (2013). Propaganda and UFOs in Movies and Television with Comments from Robbie Graham. The UFO Trail.

Frances Stonor Saunders. (2000). The Cultural Cold War: The CIA and the World of Arts and Letters. The New Press. Opening section.

Who is Robbie Graham? 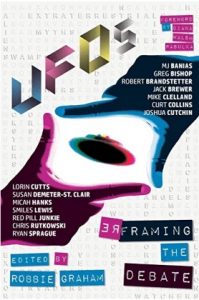 A self-described independent scholar, Graham reports on such topics as processes by which Hollywood’s UFO movie content is shaped and the resulting impact on popular perception.

In 2017, Graham published UFOs: Reframing the Debate, a collection of original essays exploring alternative perspectives on UFOs and how we might more usefully study the phenomenon in the 21st Century. The book brings together some of the most progressive and iconoclastic thinkers in the field for an incisive deconstruction of current popular ideas. Critical but constructive, this challenging volume represents a range of differing (even conflicting) alternative viewpoints on UFOs and related phenomena.

So, is there a Hollywood UFO conspiracy? Yes and no.

Just how influential are intelligence agencies in manipulating UFO-related film scripts, info presented in documentaries and so on? “Very influential,” Graham informed me via email, but that is by no means to suggest Hollywood is entirely controlled by the powers that be, because of course it is not.

Minor government influence, in that…

“Whatever effect UFO movies have on our perceptions of the phenomenon,” Graham continued, “it is largely the result of a natural cultural process whereby Hollywood creatives feed off of existing UFO literature and debate and incorporate these ideas into their narratives. Just because a film contains specialized ufological detail does not mean it has been produced at the behest of the US government for acclimation or disinformation purposes. More often than not, it means the screenwriter has read one or more books on UFOs or watched some documentaries on the subject and thought it would be cool to incorporate some of these ideas into a fictional story.

Significant government influence, in that…

“That said, and as Matthew Alford and I showed in our peer reviewed article, the US government and military have demonstrated a very keen interest in Hollywood’s UFO output since the early years of the phenomenon and have, on occasion, monitored and successfully interfered in the production process of UFO-themed movies and documentaries.”

Three Examples of CIA censorship in the media.

CIA edits the movie version of 1984

In the novel 1984, author George Orwell described life under a totalitarian regime in which a disingenuous Ministry of Truth regularly rewrote history to effectively promote the state. It might therefore be considered darkly ironic that the Central Intelligence Agency changed the ending to the movie version of the story. The change portrayed a less morally defeated main character than contained in the book and against the specific instructions of Orwell. The CIA apparently did not want movie goers to think Big Brother was all that bad.

Stonor Saunders further reported the CIA purchased the film rights to Orwell’s Animal Farm following his death in 1950. Agents were dispatched to visit Orwell’s widow and secure the rights so the Agency could present a more overtly anti-Communist message than the author saw fit to do in his original classic novel. Orwell used a tale of political unrest among animals on a farm to metaphorically suggest the fundamental difference between greedy, power hungry capitalists and greedy, power hungry Communists was impossible to discern, a point that seemed to have sat no better with the actual CIA than it might have sat with the fictional Ministry of Truth.

One such item involved a 1958 CBS broadcast in which the network subsequently admitted it was subjected to official censorship. During a televised discussion about UFOs in which military officers participated, the microphone of U.S. Navy Major Donald Keyhoe was cut. The major was muted when he made apparently unapproved statements, including suggesting UFOs were real machines under intelligent control. Nine days later, CBS director of editing, Herbert A. Carlborg, acknowledged that “pre-determined security standards were in place” and that deviations thereof were not authorized for release, resulting in the censorship.

Identifying motives for the vast majority of investors in film and other forms of media is simple enough. Some want to increase public awareness of topics in which they have personal interests. Some are artists and support the arts. Many, of course, desire to profit from their financial investments.

In the case of government manipulation of media and resulting perceptions about UFOs, motives become more difficult to conclusively identify. The fact such manipulation occurs is clear enough, but precisely why it happens is the subject of debate.

A Menu of Motives

Cover-up UFOs through Ridicule
Others still would suggest government interference in the Hollywood-portrayed UFO phenomenon might be indicative of efforts to cover up an alien presence – not disclose it. Arguments to this effect commonly include citing circumstances of official censorship of potentially relevant events. Those who support such theories and the extraterrestrial hypothesis also tend to suggest the topic is intentionally made to appear silly in an official attempt to devalue its likelihood and oppress serious public consideration.

Perpetuate an alien hoax to cover up advanced military craft
Yet others argue government manipulation of public perceptions about UFOs might be due to it being a scam – that select members of the powers that be actually want us to believe in a nonexistent alien presence. Supporters of this school of thought suggest the intelligence community finds it advantageous to conduct some of its covert operations, such as certain projects involving advanced aircraft or psychological experiments, within the confusion and resulting cover provided by an alien meme. Some suspect the intelligence community has essentially perpetrated an alien hoax for numerous advantageous reasons.

Manipulate perception for other reasons
Perhaps the truth is found somewhere among and between such possibilities, not entirely within or without any of them. Perhaps certain events indeed involve circumstances that confound many of us, but in reality, have nothing whatsoever to do with interplanetary spaceships or their alleged occupants, interesting and fascinating as correct explanations might actually be. And perhaps sometimes the intelligence community indeed manipulates perception of such circumstances for many reasons.

Robbie Graham on UFOs in the movies

“Feature films and documentaries influence our opinions about pretty much everything, including UFOs,” Graham explained, “to a very great extent indeed.

Outside of the UFO community – which is relatively very small – almost no one reads factual UFO literature (and most UFO literature isn’t very ‘factual’ anyway). For most people, ideas about UFOs and potential ET life come via TV and cinema – either in the form of ‘factual’ documentary series (such as ‘Ancient Aliens’, for example), or, more traditionally, through the fantastical imaginings of Hollywood creatives.

TV and cinema are, without question, the two biggest ‘spoons’ feeding us ideas about UFOs and ET life.”

Graham suggested cinema is more powerful than television, lingering much longer in the memory. He gives television its due in cultural influence, but described cinema as having a mystical ability to completely detach us from our physical environments while creating a vivid realm of perception.

“But regardless of the medium through which they are screened, movies can pack a punch that we feel for weeks, months, or even years afterward. The power of the story – of storytelling – is primal, and essential. Movies, in their slick, neatly packaged, self-contained way, serve to narrativize the frustratingly non-narrative, and therefore unpredictable and confusing events, processes, and ideas that constitute our world. Life rarely makes sense, but movies usually do, and in that we take comfort – rightly or wrongly.”

How does Graham assess the overall accuracy of UFO documentaries, films based on true stories and similar such productions?

“Most TV documentary series about UFOs are sensationalized pap,” he replied. “This is a shame, because even the worst of them do include demonstrably factual and important information about the phenomenon; sadly, this information is usually presented in the tackiest and most hyperbolic manner, which has the effect of discrediting the actual material.”