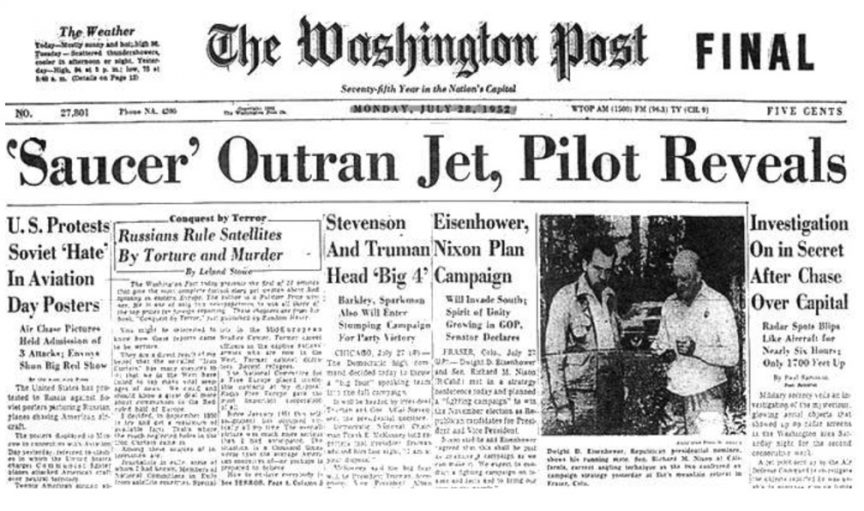 Two F-94s were scrambled and were not able to intercept the “glowing aerial objects” over Washington D.C. on July 28, 1952

Military secrecy veils an investigation of the mysterious, glowing aerial objects that showed up on radar screens in the Washington area Saturday night for the second consecutive week.

A jet pilot sent up by the Air Defense Command to investigate the objects reported he was unable to overtake the glowing lights moving near Andrews Air Force Base.

The CAA reported the objects traveled at “predominantly lower levels”-about 1700 feet. July 19. Air Force spokesmen said yesterday only that an investigation was being made into the sighting of the objects on the radar screen in the CAA Air Route Traffic Control Center at Washington National Airport, and on two other radar screens. Methods of the investigations were classified as secret, a spoken said.

The expert has been identified as Captain E.J. Ruppelt. Reached by telephone at his home in Dayton yesterday, Ruppelt said he could make no comment on his activity in Washington.

Capt. Ruppelt confirmed he was in Washington last week but said he had not come here to investigate the mysterious objects. He recalled he did make an investigation after hearing of the objects but could not say what he investigated.

Another Air Force spokesman said here yesterday the Air Force is taking all steps necessary to evaluate the sightings. “The intelligence people,” this spokesman explained, “sent someone over to the control center at the time of the sightings and did whatever necessary to make the proper evaluation.”

Asked whether the radar equipment might have been mis-functioning, the spokesman said, “radar, like the compass is not a perfect instrument and is subject to error.” He thought, however, persons acquainted with the problems of radar would make the investigation.

Two other radar screens in the area picked up the objects. An employee of the National Airport control tower said the radar scope there picked up very weak “blips” of the objects. The tower radar’s for “short range” and is not so powerful as that at the center. Radar at Andrews Air Force Base also registered the objects from about seven miles south of the base.

A traffic control center spokesman said the nature of the signals on the radar screen ruled out any possibility they were from clouds or any other “weather” disturbance.

“The returns we received from the unidentified objects were similar and analogous to targets representing aircraft in flight,” he said.

The objects, “flying saucer or what have you, appeared on the radar scope at the airport center at 9:08 PM. Varying from 4 to 12 in number, the objects appeared on the screen until 3:00 AM., when they disappeared.

Airline, civil and military pilots described the objects as looking like the lit end of a cigarette or a cluster of orange and red lights.

One jet pilot observed 4 lights in the vicinity of Andrews Air Force Base, but was not able to over-take them, and they disappeared in about two minutes.

The same pilot observed a steady white light in the vicinity of Mt Vernon at 11:49 PM. The light, about 5 miles from him, faded in a minute. The lights were also observed in the Beltsville, MD., vicinity. At 1:40 AM two-other F-94 jet fighters took off and scanned the area until 2:20 AM., but did not make any sightings.

Besides the pilots, who last Saturday saw the lights, a woman living on Mississippi Ave., told the Post she saw a very “bright light streaking across the sky towards Andrews Air Force Base about 11:45 PM. Then a second object with a tail like a comet whizzed by, and a few seconds later, a third passed in a different direction toward Suntland, she said.

Radar operators plotted the speed of “Saturday night’s visitors” at from 38 to 90 mph, but one jet pilot reported faster speeds for the light he saw.

The jet pilot reported he had no apparent “closing speed” when he attempted to reach the lights, he saw near Andrews Air Force Base. That means the lights were moving at least as fast as his top speed-a maximum of 600 mph.

One person who saw the lights when they first appeared in this area did not see them last night. He is E.W. Chambers, an engineer at Radio Station WRC, who spotted the lights while working early the morning of July 20 at station’s Hyattsville tower.

Chamber’s said he was sorry he had seen the lights because he had been skeptical about “flying saucers” before. Now he said, he sort of “wonders” and worries about the whole thing.

Leon Davidson, 804 South Irving St. Arlington, a chemical engineer who made an exhaustive study of “flying saucers” as a hobby, said yesterday reports of saucers in the East, have been relatively rare.

Davidson has studied the official report on the saucers, including some of the secret portions never made public, and analyzed all the data in the report.  Davidson, whose study of saucers is impressively detailed and scientific, said he believes the lights are American “aviation products”- probably “circular flying wings,” using new type jet engines that permit rapid acceleration and relatively low speeds. He believes, they are either “new fighter,” guided missiles, or piloted guided missiles.

He cited some of the recent jet fighters, including the Navy’s new ” F-4-D, which has a radical “bat-wing,” as examples of what the objects might resemble.

Davidson thinks the fact that the lights have been seen in this area indicates the authorities may be ready to disclose the “new aircraft” in the near future.

Previously, most of the “verified saucers” have been seen over sparsely inhabited areas, Davidson explained, and now, when they appear here, it may indicate that “secrecy” is not so important anymore.