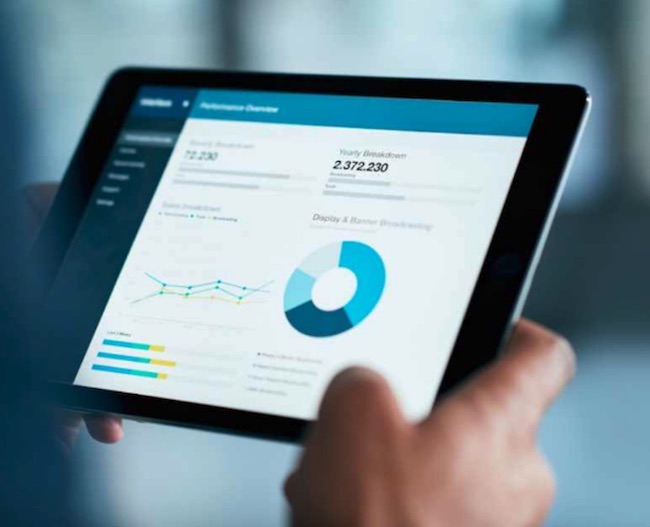 These finding are based upon comprehensive global research between 2013-2017 by the organization called FREE. The sample size was 3000+ people who have had conscious explicit memories of an encounter with a non-human intelligence (NHI). This excludes those who report experiences from hypnotic regression, channeling or lucid dreams.

In May 2013 Rey Hernandez a practicing attorney, whose recently had several profound UFO and ET/ED encounters, teamed up with:

Together they created the Foundation for Research into Extraterrestrial and Extraordinary Experiences (FREE). They assembled an impressive team of 25 academics, researchers, and experts, 15 of whom had PhDs.

Over 3000 subjects recalled their encounters consciously without the aid of altered states.

For five years, from August 2013 through April 2017, FREE conducted: “the first comprehensive investigation on individuals (N= 3,256) who have reported various forms of contact experience (CE) with a non-human intelligent being (NHI) associated with or without an unidentified aerial phenomenon (UAP).”

All encounters with NHIs included in the research were required to be consciously recalled explicit memories. This excluded those who reported experiences based on techniques such as hypnotic regression, channeling or lucid dreams. Thus, all 3000+ subjects recalled their encounters consciously without the aid of altered states.

The first year was spent developing the research methodology. Three years were spent widely disseminating the quantitative and qualitative surveys associated with the research. Below are 10 of the most provocative results of this groundbreaking research, which has overturned numerous orthodox views within UFOlogy. These finding are significant because this is the most comprehensive and long-term global research ever conducted on such a large sample size (3000+) of consciously recalled encounters with NHIs.

Overview of the Research Findings

This five-year research project was notable for not only being the first global survey of its kind but many of its findings overturned or contradicted many long-held positions or beliefs in UFOlogy. Below is a brief overview of some of these findings.

85+% of respondents reported a positive encounter with NHIs

Over 25 different questions asked if the contact was positive, negative, or neutral. Depending on the question, between 85-95% reported a positive encounter.

Surprisingly few respondents reported an abduction, and even fewer considered themselves “abductees:”

Only 32-34% of participants (depending on the question asked) who reported seeing an UFO/UAP also reported being abducted by an NHI (i.e., being “forcibly taken to another location against their will”). Thus, the vast majority of UFO/NHI encounters (67%) did not involve abduction scenarios. Of the ~33% who reported being abducted 85-95% viewed their later encounters in a positive light. Consequently, 70% of all those who reported abduction experiences in the research self-identified as “contactees” NOT “abductees.”

85% of respondents described their contact with NHIs as transformative

95% had paranormal experiences in their homes

80% have had an out of body experience (OBE)

61% have experienced material objects moving around without reasonable explanations

50% received a medical healing by NHIs

37% have had a near death experience (NDE)

25% have witnessed material objects mysteriously appearing in front of them

After contact with NHIs people reported an increase in the following experiences:

52% experienced the malfunction of electrical equipment in their presence

60% of respondents reported having over 10 encounters with NHIs

A surprising number of participants (40%) reported having more than 20 contact experiences and another 20% reported having between 10-20 encounters. This highlights that many – maybe most – experiencers have multiple encounters with NHIs. The research also showed that the more encounters someone had the more positive they tended to view the contact.

Participants reported encountering a wide range of different types of NHIs. The research analysis identified nine major types of NHIs. However, the catch all category of “Other” contained over 1000 responses with 100s of different types described. This challenges the idea that most “aliens” are the iconic Grays with their small arms/legs, big heads and wrap around “bug” eyes. It also, expands the short list of typical NHIs from 3-5 “usual suspects” (e.g., tall blond Nordics, short and tall Grays, Reptilians, and Mantis beings) to a much larger diverse list of 8-10 types (see charts below).

These results are striking for a few reasons. First, encounters with both Energy Beings and Human Looking NHIs occurred slightly more than with the iconic Short Grays. Second, respondents in this context were also asked if their encounters were positive, neutral, or negative. Human Looking NHIs were the most positive (61%) followed by Energy Beings (48%) and Hybrids (47%). The most neutral was basically at three-way tie between Short Grays, Reptilians, and Insectoids (59-60%). Reptilians were the NHIs most commonly associated with a negative encounter (23%), which was basically double any other type of being.

A total of 708 participants reported that they had an encounter with a NHI while on a UFO/UAP. Here is the breakdown of the types of beings encountered on UFOs:

These results are striking for a few reasons. First, Human Looking NHIs are the most common type of being encountered on a UFO/UAP. This list largely remains in the same order as the one above. However, Energy Beings drops off entirely and is replaced by the category “Other.” Also, it is interesting to note that The Spirit/Ghost type drops from #4 in the prior list to #8 in this list – indicating that it is less common to encounter such NHIs on craft than it is in other settings. Some other interesting data points reported by the FREE research in the context of these on-board encounters includes:

75% said they saw more than 3 NHIs on the craft

48% stated that the craft was alive – a living entity

44% know why they were taken aboard the craft

41% stated they had been on a craft as a child

34% consciously recall lying on a table and being medically examined

32% were allowed to roam the craft without supervision

24% stated they have operated a craft

20% consciously recall receiving an operation by an NHI

19% recall seeing other humans on the craft

Experiences believe that NHI’s can travel through time

Can NIHs travel to other dimensions? Yes - 97%

Can NHIs travel to both the past and also the future? Yes – 84%

Encounters with NHIs in a “Matrix-like Reality” is Very Common

A total of 749 participants reported encountering a NHI in a “Matrix-like Reality” (MR). This is a bit higher than those who reported encounters while aboard a UFO. Participants often described a NHI showing up in their bedroom and then a “multi-dimensional portal” opened up, often in a wall. The experiencer then travels through the portal into the MR. Others describe a dome made out of light appearing on the ground. They are instructed to enter it and then are transported to a MR. In some cases, they are taken to a UFO and then from there enter into the MR.

These MRs are described in ways that sound like OBEs, NDEs or remote viewing sessions. In fact, 67% of individuals who reported that they encountered a NHI in a MR believed that their consciousness was separated from their physical body at the time of contact. However, many still reported there being a physical dimension to the contact experience with the NHI. Often, the participants experience being gone for a long time but their friends and family report they were only gone for minutes. Additional similarities between these MR experiences and OBEs and NDEs were documented. Here is the breakdown of the types of beings encountered in MRs:

A few things stand out with these percentages. First, Human Looking NHIs are the #1 type of being encountered in a MR as they were in a UFO. They were also #1 and #2 in the charts above – so they are across the board the most common types of NHIs encountered. Then in the #2 slot we have Other Types, which suggests that there is a much wider range of “nonconventional” types of NHIs in MRs than there are in UFOs. In the #3 slot we see the Spirit/Ghost Form return as a category, which was pretty common in the physical encounter list but was entirely absent in the UFO list. Then the rest of the list pretty much follows the same order as the other two charts, which is quite interesting in and of itself.

Participants with more than 10 contact experiences were asked if they had experienced a “reality with no boundaries that was as real as talking with a family member.” 655 respondents contributed to the following profile of such an environment, which the researchers labeled a “matrix reality.” 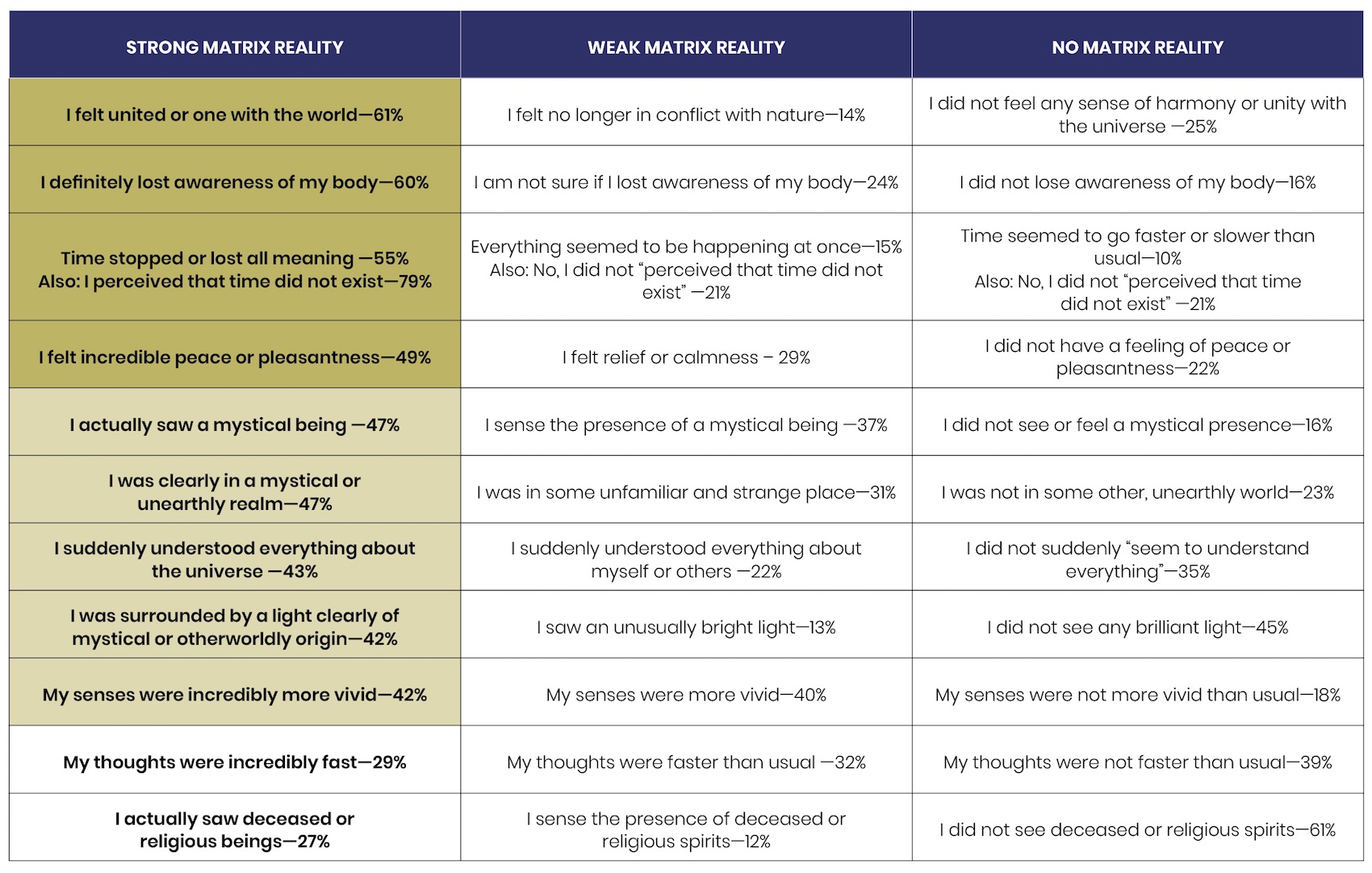 FREE’s Research Committee was co-chaired by Dr. Jon Klimo emeritus professor of psychology at Argosy University with over 40 years of experience with research methodologies, Dr. Bob Davis emeritus professor of neuroscience at State University of New York, and attorney Rey Hernandez. They designed a multi-phase quantitative and qualitative global survey to investigate human encounters with NHIs via various contact modalities such as out of Body experiences (OBEs), near death experiences (NDEs), meditation, UFO contact, and so on. One of the main intentions of this research was to shine a light on the potential interrelationships between the various contact modalities.

There were three phases of the FREE research:

All subjects in a subsequent phase completed the previous phase. Even though the three surveys were in the English language the 3,000+ subjects where from over 100 countries world-wide. Though the majority (88%) of subjects not surprisingly were from the US, Canada, Australia, and the UK. There was, slightly more women (57%) than men (43%) associated with Phase 1 & 2. And 56% of subjects were between 45-64 years of age. The vast majority of subjects (71%) identified as White/Caucasian.

Check out the Primary Sources

The FREE research outlined in brief above is groundbreaking on many levels and a real contribution to the field. We encourage people, who are interested in this research, to check out an academic article that provides a 50-page overview of their Phase 1 and 2 research and findings. It was published June 30, 2018 in the quarterly peer-reviewed Journal of Scientific Exploration (Vol 32 No 2 pp. 298-348). It can be found here: https://www.scientificexploration.org/docs/32/jse_32_2_Hernandez.pdf. The full details on their methodology, results, and analysis can be found in their 820-page book Beyond UFOs: The Science of Consciousness and Contact with Non-Human Intelligence. And you can visit their website at www.consciousnessandcontact.org.