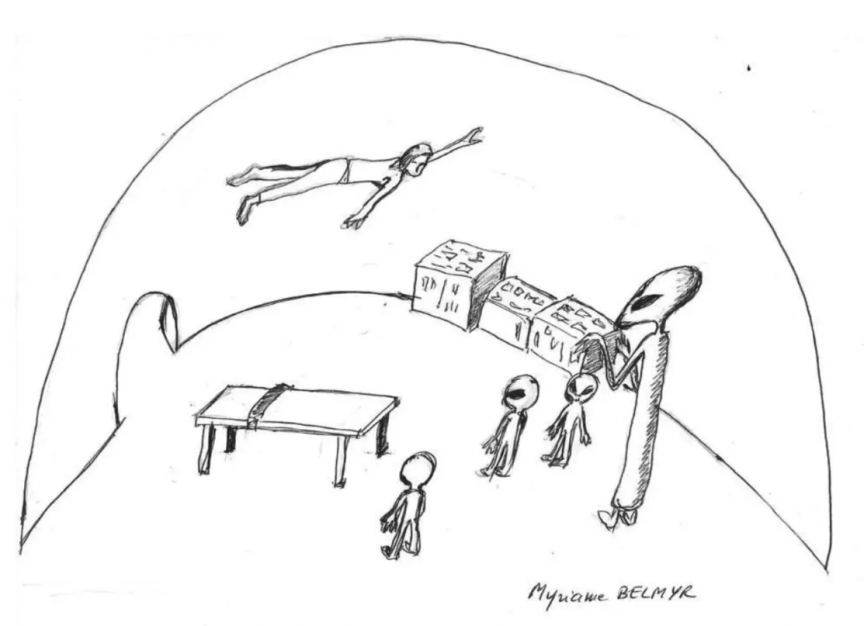 Paul Douard. (2018). I Treat People Who Believe They’ve Been Abducted by Aliens. Vice.

Sketches from Paul Douard. (2016). We Asked People Who Claim They Were Abducted by Aliens to Draw Their Experience. Vice.

Nicolas Dumont could not be more casual as we chat about alien abductions. “It’s not a hallucinatory experience or a spiritual one,” says the clinical psychologist. “The experience leaves physical marks behind, plus victims get extraordinary powers, like the gift of healing or clairvoyance.”

Dumont’s patients believe they’ve experienced an alien abduction, with some saying they’ve been taken multiple times. The claims are so convincing in their detail, says Dumont, that he’s fairly certain something must have happened. 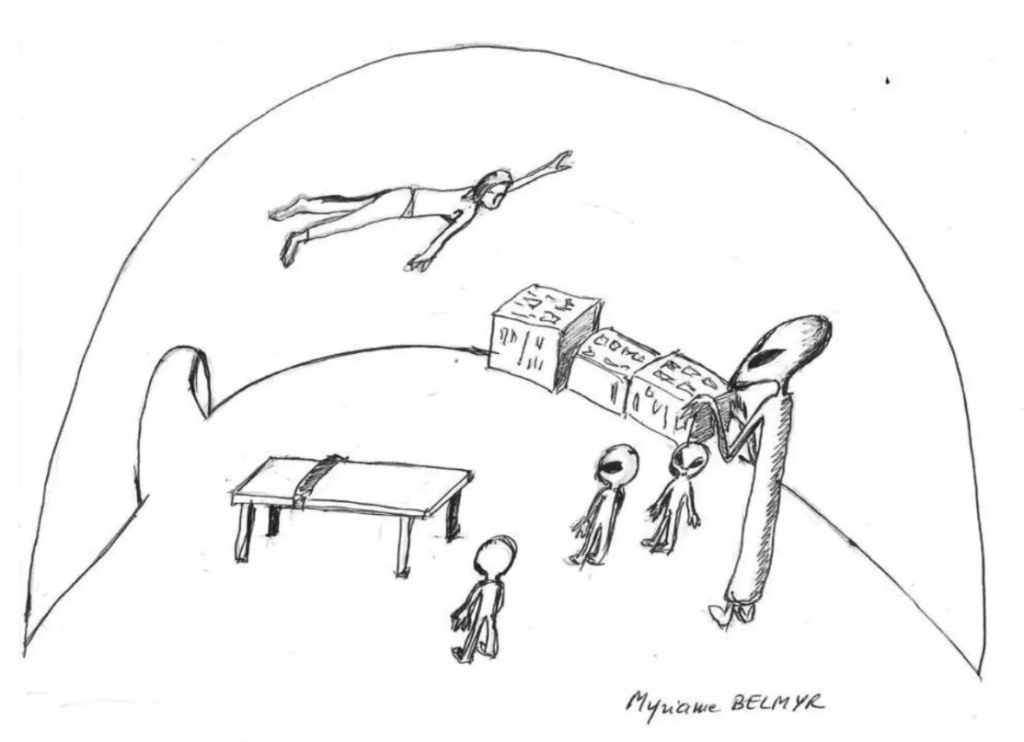 Myriame’s drawing of her experience 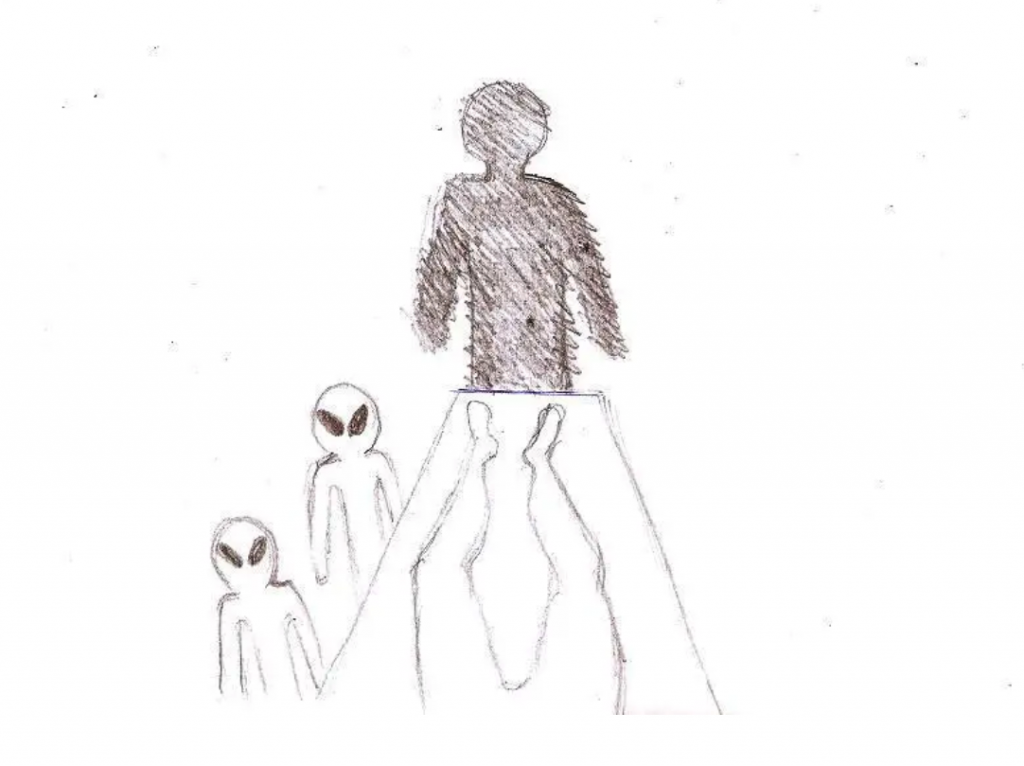 Louise’s drawing of her experience

In the four years I’ve been doing this, I’ve seen about 100 patients, all French, who have shown signs of an abduction

Dumont isn’t the first psychologist to specialize in this. John Edward Mack, a professor at Harvard and former psychiatrist, spent part of his life studying this same phenomenon, following nearly 200 cases of people who believed they had been abducted by aliens. In 2003, he explained in an interview:  “When you’re talking to a psychotic who’s telling you something that seems like a psychosis, you do get the feeling that it never happened. But in these cases, it’s nothing like that. These people are healthy. They question themselves sometimes. But they’re describing an experience that’s real and intense—something being done to their bodies.”

A while ago, I spoke to some of Dumont’s patients about their experiences. This time, I wanted to chat to the psychologist about how he thinks he can tell whether someone has been abducted or not and why he’s convinced that more medical professionals should be open to believing in the supernatural.

VICE: How many patients have you seen who think they’ve been abducted by aliens?
Nicolas Dumont: Firstly, it’s not as if they all come in saying “I was abducted by aliens,” but lots of them think that it might be what happened. In the four years I’ve been doing this, I’ve seen about 100 patients, all French, who have shown signs of an abduction. I still see five of them regularly, several years after they first came to me. One of them, Sonia, has been experiencing these kinds of abductions since she was little.

Almost universally, my patients talk about the presence of a table, very specific beings and telepathic contact.

What do you do when someone shows up at your office saying they were taken?
I have a two-pronged approach. First of all, the diagnosis: I want to understand who I’m talking to. A person is, first and foremost, a very precise personality and from a very precise culture. Their cultural context and their approach to the world are fundamental to this part of my approach. Then I go into the exploration phase with the patient. The goal is to clarify what they want. Some want to understand what happened, others want to end it, and, of course, many want confirmation of the idea they were abducted. Lots of them ask me for hypnosis, but that doesn’t always work.

Very often, these people claim to have new powers. Some people can float out of their bodies, while others acquire healing powers. And most have marks on them from the experience.

So what’s the evidence you look for that makes you believe a patient may have been abducted?
Often these people tell me they were awoken in the middle of the night and found themselves paralyzed. They saw non-human beings around them, whether they were at home or in an external place that might have been a spaceship. Sometimes they were in both. Some hadn’t experienced anything until they woke up at home thinking it was morning before realizing 48 hours had just gone by. We call that “missing time”—it’s very common. The best-known case is that of Betty and Barney Hill in 1966.

From there, whatever your culture and background, the same elements are always there. Almost universally, my patients talk about the presence of a table, very specific beings and telepathic contact. Mentioning these specifics right away focuses my thinking toward whether the person has actually experienced something or not. Very often, these people claim to have new powers. Some people can float out of their bodies, while others acquire healing powers. And most have marks on them from the experience.

You talk about “beings.” Are there multiple races of aliens trying to contact us?
After several years of research and interviews, I’m convinced there are.

It seems like there are reptile aliens who sometimes provoke terror, other times a kind of love. Then you have the blond humanoids who are very tall and paternal; patients feel good around them. There are also the little gray men, who are particularly invasive and devoid of empathy. They’re the worst because their coldness is very often traumatizing. Some patients also tell me of contact with insectoid creatures, whom they perceive as superior entities—the ones in charge.

I see. And what are some of the personal traits of the patients who come to see you?
In the vast majority of cases, I’m seeing people who’ve experienced childhood abuse, accompanied by deep emotional deprivation. Of course, that’s immediately used by skeptics who make a connection between their trauma and the experiences they claim to have had. But in reality, those two things have nothing to do with each other.

I think it’s an initiation of sorts. After such an experience, you feel an overhaul of the self.

Why?
I truly believe that people who’ve been abused in the past have already been in contact with a certain “otherness.” Their past experiences have created an ontological shock. We might compare this to going outside after having been in a dark room. When you’ve experienced an intrusion like having been abused as a child, I think you might, unfortunately, be more prepared than others to experience this kind of terrifying contact.

And what are they like after their experience?
What’s interesting to me is the very particular link that forms between the abductee and these beings. They can feel the next abductions coming in advance. I think it’s an initiation of sorts. After such an experience, you feel an overhaul of the self. Your guidance center in life isn’t your specific personality any longer, but rather this mystery within you, something that’s bigger than yourself. So basically, the person emerges from an individualist vision and acquires a vaster conscience. It’s an awakening of the heart.

Those who don’t want to hear about it simply haven’t ever seen the evidence.

I imagine it must not be very common to specialize in all of this.
There are people who live through extraordinary things, like having out-of-body experiences. That’s just how it is. Same goes for these abductees. I don’t fear for my reputation; I want to understand and help people. Other psychologists are afraid to talk about this sort of stuff to their colleagues. But nothing about this bothers me because I approach it scientifically. Sure, I run into plenty of reticence—but I also meet people with open minds. I’m only ever looking to have conversations. Those who don’t want to hear about it simply haven’t ever seen the evidence.

How about you? Have you ever had an experience with aliens?
I saw a UFO when I was young. But I completely put the memory aside. It came back to me three years ago. Also, my siblings practiced spiritism when we were young—I’d see glasses moving on the table. It was incredible, being in contact with an invisible phenomenon.

And is that where your interest in abductions came from?
I studied psychology in college in the most classical sense. But even then, I was already curious about everything relating to extraordinary experiences. When I read the testimonies of people who’d had near-death experiences, and realized just how much those experiences had changed their lives, I asked myself, ‘What’s the point of doing therapy for decades if a single experience can change everything?’ And after that, I never shut the door on people’s experiences. I went to the INRES (Institute for Research on Extraordinary Experiences) where I met the writer Stéphane Alix [he is the author of “Aliens: An Investigation”]. It was thanks to him that I got so deeply into abductions. I think you have to have gone through all these steps in order to understand what people say they have experienced.

And what do you do when you are certain that a patient hasn’t been abducted?
It depends on the case. If we’re looking at a pathological liar, he won’t allow us to dispute his version of events.

I saw a patient a while back who had already managed to indoctrinate UFOlogists—he was really feeding off of that, that feeling of being special. That’s typical with pathological liars.

On the other hand, some do accept that it wasn’t an abduction after all. But on my end, I never tell them that they weren’t abducted; I never tell someone they’re a liar. It’s a discussion, and my job is simply to point the person in the right direction.

Do you think that alien beings come to visit us?
It’s my job to calm my patient’s suffering when they’ve been through something that could potentially destroy them.

Emilie’s drawing of her experience

Stephane’s drawing of her experience